Aaron and I had talked about doing the Saco in the summer and if anything is was entertainment.  The number of people and crafts on the river was astounding!  We put in at Swan's Falls and made for the confluence of the Old Course where we would camp for the first night.  From there we planned to make it downstream for a few more miles to find a second site for the night and take out Sunday.  Ahh, but plans have a habit of changing.

At Swan's we got a fire permit, ran shuttle and started to off load.  There must have been at least 4 policemen there checking coolers, apparently they don't like you bringing too much alcohol but we didn't get checked.  There was also a game warden there checking on wood as there are invasive beetles that they want to keep out.  We bought four bundles of wood for a hefty price but called it good.  Ya gotta know with all the people on the river there isn't a stick of wood to had for a fire!

I have to say that for the zoo it was there were some pretty unique rigs out there.  Multiple canoes rafted together with plywood decks and more added on but they sure were hard to maneuver and it took lots of rope work with folks in the river to get around bends.  I know why the rental companies buy Disco's for their boats, people just abuse them but as the proud owner of one I can say they do stand up to some hard knocks and keep on going.

It really turned into a beautiful day, sunshine, blue skies, and we kept a good pace to keep away from the groups of lilydippers.  I was in hoggy heaven with my new rebuild and aside from the seat being placed to far forward I was rather content.  I had wanted to try it out with a load and pretty much knew what to expect so I was wasn't disappointed at all.  Just meant a little harder paddling and some modifications later down the road.

I must say that some of the views were rather nice, can't argue that when you are in a congregation of people like we were. 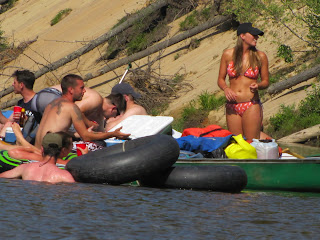 Every sandbar was crowded to the max and there were more tents then I could count set up.  It was a major party scene!

In the end we got the Old Course and had a spit of land right where it flowed out.  Thought we were golden but as the day waned and got darker more and more people kept drifting in and taking up more land space.  We ended up sharing our hunk of shore with a crew from the towering water slide hulk we saw earlier.  They turned out to be real nice folks but sharing space sometimes just sucks. 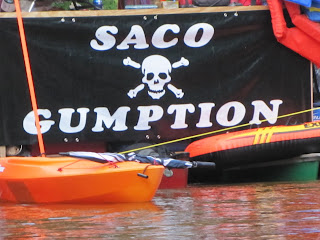 Somewhere around dark Aaron and I decided to head up the Old Course with the hope of making the bridge and the campsite we had been at last fall.  It's only about a mile and a half up to the bridge and the leanto campsite but we kept hitting down trees river length and despite a full moon bright in the sky we had a hard go of it.  In the channel the moon offered some light but we did need our headlamps do manover through them sometimes doing some interesting moves to get through.  The further we went the less the noise got and at one point it was just was a delight to the ears to hear the voices of the night from the critters that live there and don't visit!

We didn't make it to the bridge as the current flowing out from the lake was enough to make it a slow slough upstream.  Regardless it was sweet to paddle with the light of the moon without hundreds of people around.

In the morning we packed up in a hurry and left the crowd.  We left in such a hurry I declined to make a pot of coffee in the Almighty but did so down river on a fairly empty sandbar.  Hell, one has to have some coffee in the morning, a day is not complete without it!  While we were waiting for the joe to brew Aaron suggested getting off the river instead of another night on it as the liveries would be putting even MORE PEOPLE on the water.  It was a no brainer.  We had to do 12 miles back to the car and then run shuttle but it was worth it in the long run.  Better to spend the night in my own bed rather than listening to the crowds and fireworks until the wee hours.

The Saco is truly a beautiful river and discovering the Old Course last Fall was a big bonus.  There has been unbelievable improvements in the lack of trash on the banks and watching the crowds many were making every effort to clean up after themselves.  A good sign and a show of respect!  I think my time spent on the Saco in the future will have to be late spring and the fall for that is when it seems to be the best!
Posted by Scooter at 7:21 PM