Many years ago I read on the web about a Gentlemen's Trip that seemed to be a regular yearly event in the Maryland area that seemed like the thing to do.  It always sounded like such a good thing to do.  Back in those days there were few us in my neck of the woods so it never came to be.  It took a long time and maybe us NH boys have taken over the tradition, don't know but it sounds good as I write this, at least a tradition is continuing.  Thanks for the incentive from the Maryland boys!

The writing was on the wall, etched in stone as of last May.  The only thing that wasn't was the players.  Seems like every year to every other year we hit Lake Umbagog, the border of NH and Maine, for a few days of paddling and the paddlers vary so it always is a great and interesting crew.  With three rivers either entering it or exiting it there is a lot to play around with.  The wildlife is usually abundant as well.

The players this year turned out to be me, Aaron (both in Malecites), Jim (MR Explorer), Scott (Mariner), Andy (Milennium), and Ken (Catalina).  Aaron, Jim and I hooked up on Wed afternoon and headed up after loading up the truck with more gear than most would carry but this is truly a Gentleman's Trip.  I guess a definition of a Gentlemen's Trip should be explained, if it truly can be.  It is a trip that involves canoeing, camping in remote areas (at least for us Northerner's), good food, many beverages and some paddling into whatever the weather brings us.  Most days we are smiling!

Our plan was to head up to an island on the end of the Androsoggin River but plans have a habit of changing and we ended up at the bottom of the lake at the campground.  In a way that turned out better as we still needed to check in.

We got a good fire going thanks to the best fire starters ever, roadside flares!  The wood was damp but it soon was burning good and hot. 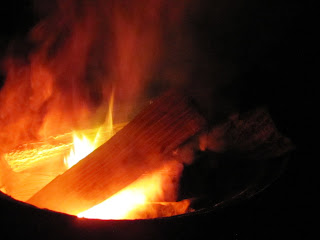 After a long day it was off to tents.  We wanted an early start to help beat any winds that can kick up.  I have no clue what time it was but I awoke to a sniffing and crunching sound and then chewing!  All I could think of was what the hell the boys were up to?  What the F!!  More of the same sounds and now I'm getting pissed off!  I find a light and shine it out of my tent.  HOLY SHIT!  SKUNK!!!  The damn thing was halfway under my vestibule and had got the zipper open on my Duluth pack and let me tell you unless you own one, that is ONE BIG ZIPPER and hard to pull and was eating my cookies!  I mean it is probably a foot and a half away from my face!  Not sure who was more startled or scared but all I could wait for was the stench that was sure to come.  It backed out with the light in it's eyes and I started saying quite loud, "A Fucking SKUNK!" repeatedly!  I backed off and I unzipped just a small opening in the rain fly and kept the light on it.  It went to the bag of garbage and rummaged round the beer cans and then did a beeline to the picnic table.  I pulled my pack into the tent and zipped everything up and hoped for the best.  Soon there was more sniffing right by my tent but a shine of the light and more swearing seemed to send the bugger else where for late night snacks.

Yeah, yeah, I know, don't store any food near or in your tent!  Lesson learned and I came out smelling better than skunk spray, pure luck!

Thursday morning I was telling the boys about this and Aaron said he heard me but thought I was muttering about another skunk smell but that is another story.  During the night Andy had driven in from NJ, a 7+ hour trip but this is his third tour of duty on this lake.  I think sometimes that he loves this place more than the rest of us! 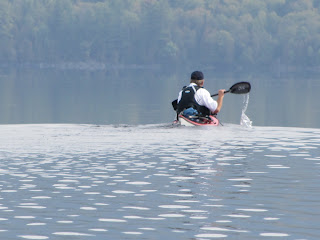 We headed out and soon put in on the Androscroggin River.  From there it was across the lake to Pine Point and then up to the mouth of Sunday Cove where we would base camp for two nights.  It was unbelievable, not a breath of wind and it was like paddling on a piece of glass.  Christ, I had to kneel a few times thinking I was going nowhere and maybe, just maybe there was a chance of falling in.  The clouds reflections on the lake made it more funky. 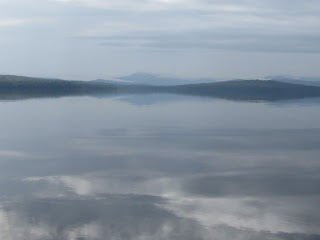 Now, in the meantime Scott and Ken had come up before us and had putin on the river and camped at a site at the mouth of the river.  They were well ahead of us.  It wasn't long before we had tents up, firewood collected and beverages going just enjoying being at this place.


Friday morning we woke up to the lake we know, heavy fog with a rising sun trying to burn it off.  It took a while and the day had its moments of bright sunshine mixed with cloud cover but it was warm out for this time of year and again the water was like glass.  We headed out to the Rapid River for an explore up that.  I had never been but most had.  Now, I mentioned that Sunday Cove is a beautiful site to camp on but you need to paddle out of it before you make the lake to head out for the day.  I was good for a long spell but as we hit the Rapid and the current from it I began to hurt some, my ol' back is still on the heal and was acting up.  I tried like hell to make it up the river to the first rapid but had to turn back knowing I had a way to go.  The rest did make it though so it was well worth the effort.


Back at camp is was business as usual.  A fantastic meal for dinner, another large fire and enough laughter to hurt ya!

Saturday morning and a hefty meal and we all packed up for the move down lake to Moll's Rock. Once again the lake was glass.  Scott and Andy took the more direct route going straight down the lake while us canoeist and Ken in his yak cut across Sturgevnet Cove to the what we call the Meadowlands, just a marshy area that is created by the Magolloway River.  I decided to cut in between the yakkers and the lilydippers and cut straight down the lake to the next site.  I still did more miles then the yakkers but less then the others.

Moll's Rock is a nice site but has over the years been picked clean of all wood so you have to go searching far and wide to find it sometimes towing it behind your boat by rope but hell it all works out.  Another good meal and fire and somewhere after dark Andy and Scott went in search of moose on the rivers.  I guess they can tell that tale.  As soon as I crashed in my tent the rain kicked in and it came down in that steady, but not heavy stuff that just soaks everything and it was humid as well.  I don't think anyone fared well as we all bitched about damp sleeping bags and wet gear to pack up but hell we were heading home.  I think the only good thing out of this evening was the sound of the loons singing at all hours of the night, a somewhat haunting but relaxing sound, that one is hard to explain.

So, in the end we had a low mileage trip but that is not the intent nor the concern of this trip.  It is just getting out to a beautiful place, pray that the weather and the lake gods treat you good and enjoy the hell out of the company and embrace the paddling.  Next year means new campsites and different places to explore.  Some places just keep drawing you back despite the fact that it is the same ol' place but each visit brings new views, new friendships, and new experiences.