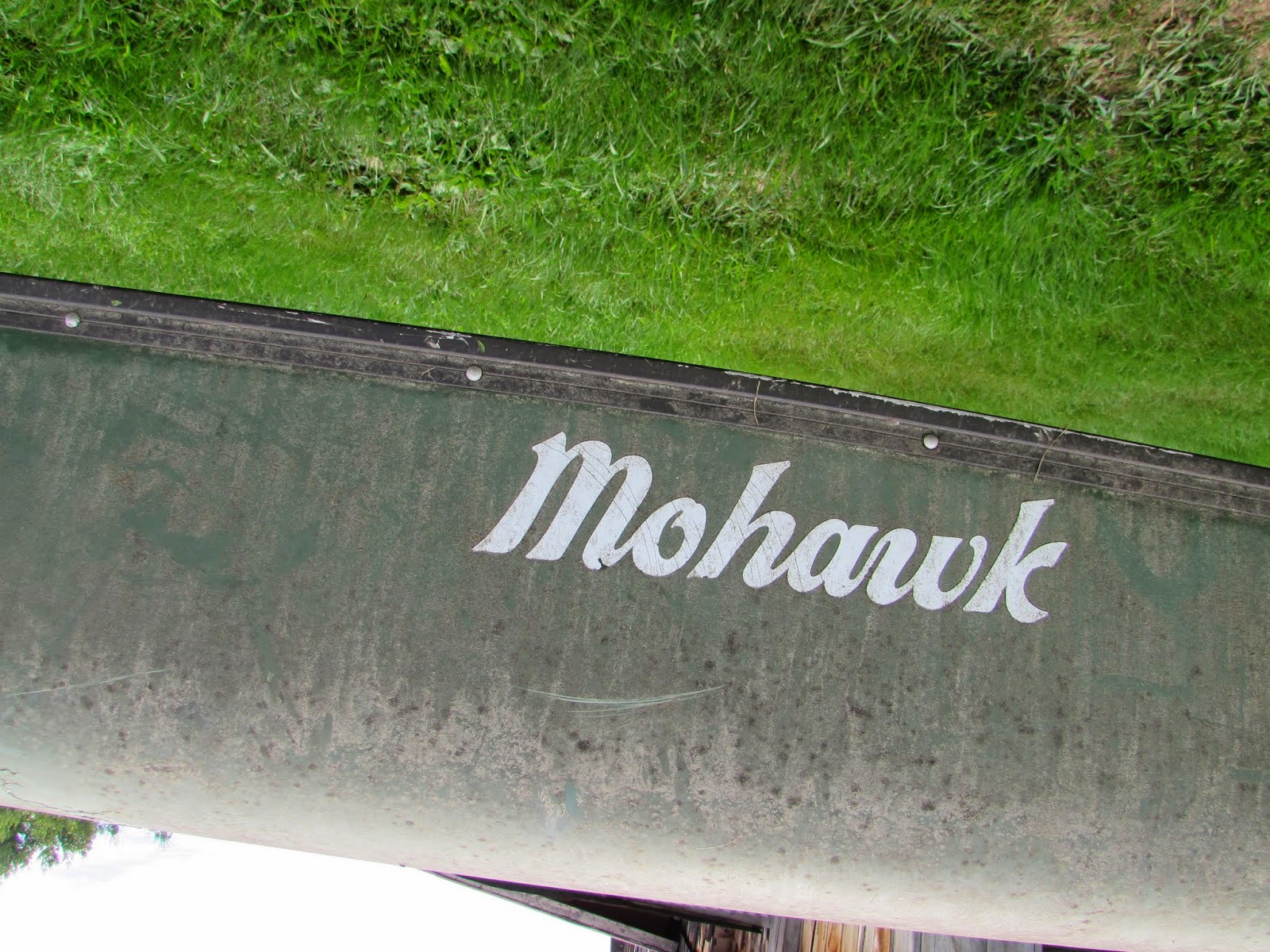 For the last three years this guy at work in Maintenance has been bugging me to fix his canoe.  He picked it up for two hundred and fifty bucks but a tree limb had dropped on it and the owner at that time fixed it best he could.  Well, somewhere along the way a new crack appeared that was letting water in.  Time for me to take a look at it.

As it turns out it is a 1989 Mohawk 16' Blazer in Kevlar.  Now Kevlar back in the time was not what it is today, more like a chopper type cloth, very rough but fairly light for a boat of it's time.  Ok, so why am I calling this write up the Goober Boat?  Well, the guy who tried to fix this was a Goober and perhaps I'm showing my age but the Gomer Ply Show had a guy named Goober, I think.  Regardless, the name sticks in my gray matter so there ya go!

Now I guess it was stored in the out of doors cause it had mold spots and a layer of dirt thick enough to start a garden on!  And the previous fixes where like little volcanoes of resin or maybe something else cause ya never know what folks use for patches, there were a lot of them!  Yee Gads I said! 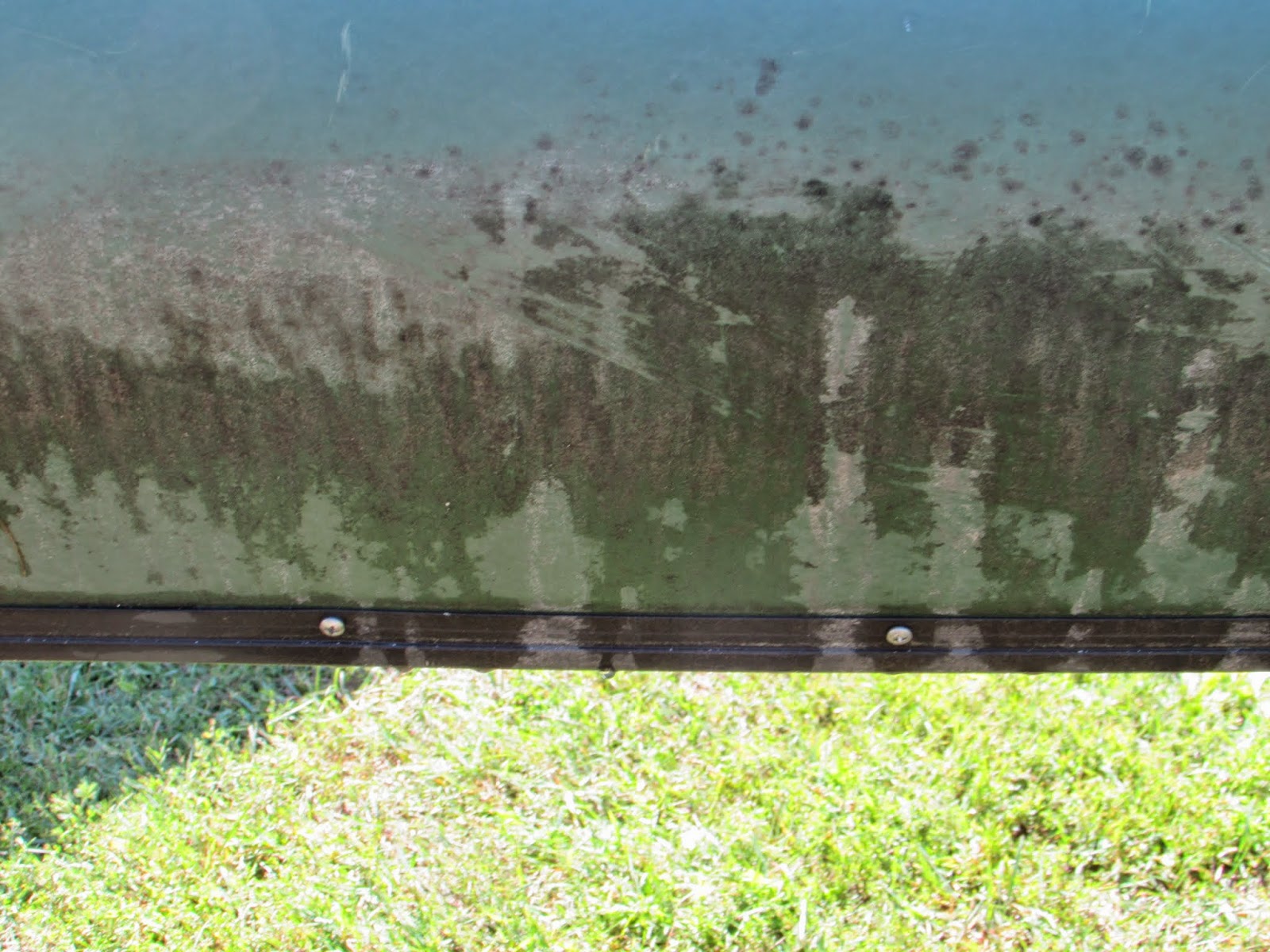 So  the next step was to fill the new crack.  I used my usual mix of West System and G-Flex mix with Dyanl cloth cause I know this is a rugged fix and being on the outside and near the chine it was a good fit.  Now, I have been experimenting with Peel Ply and this stuff is turning out to be a God Send!  It makes for a smooth finish compared to my wax paper affair and keeps run off to a minimum.  I think I may be love.  My patch came out so clean compared to past attempts is was crazy 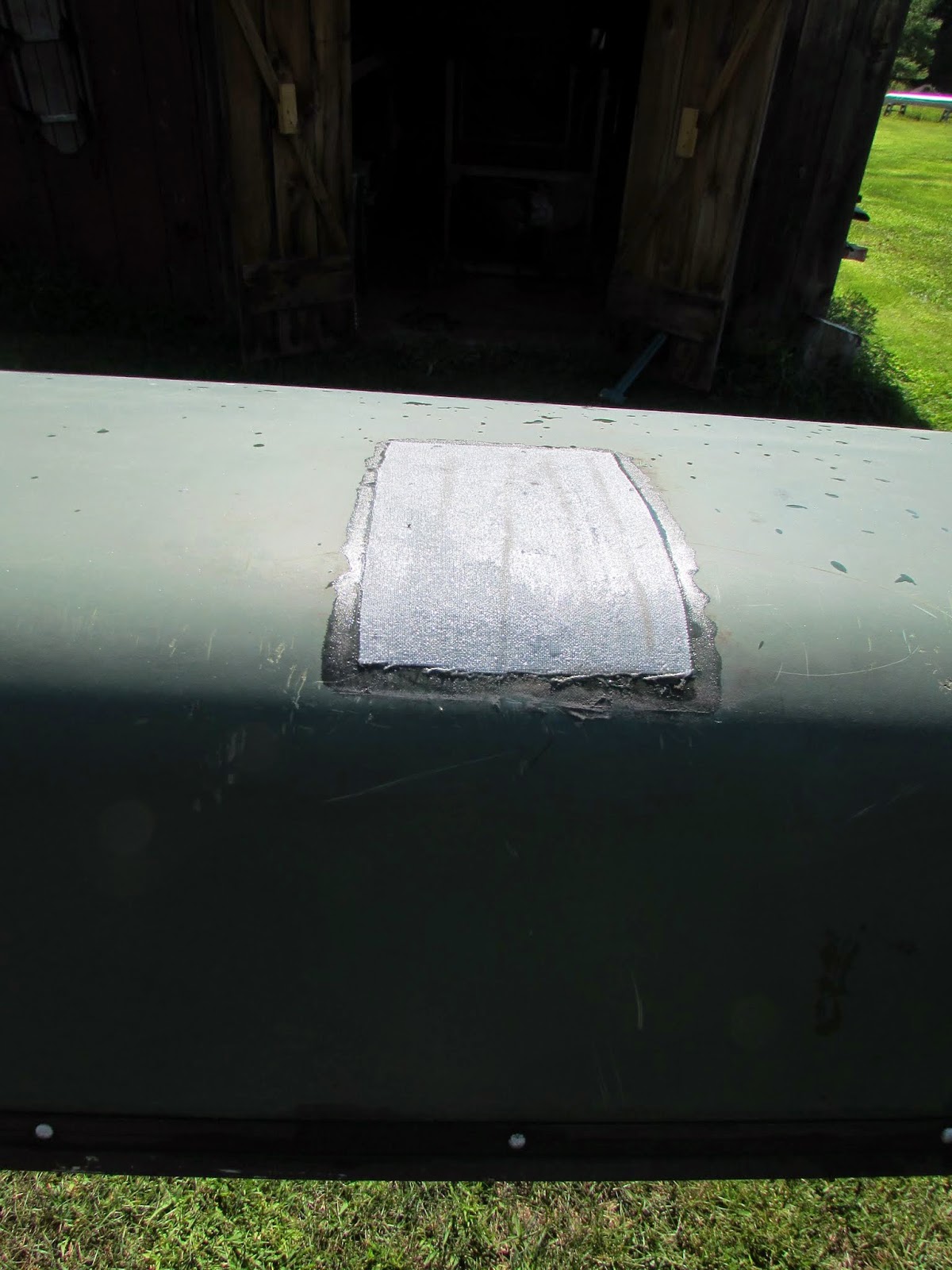 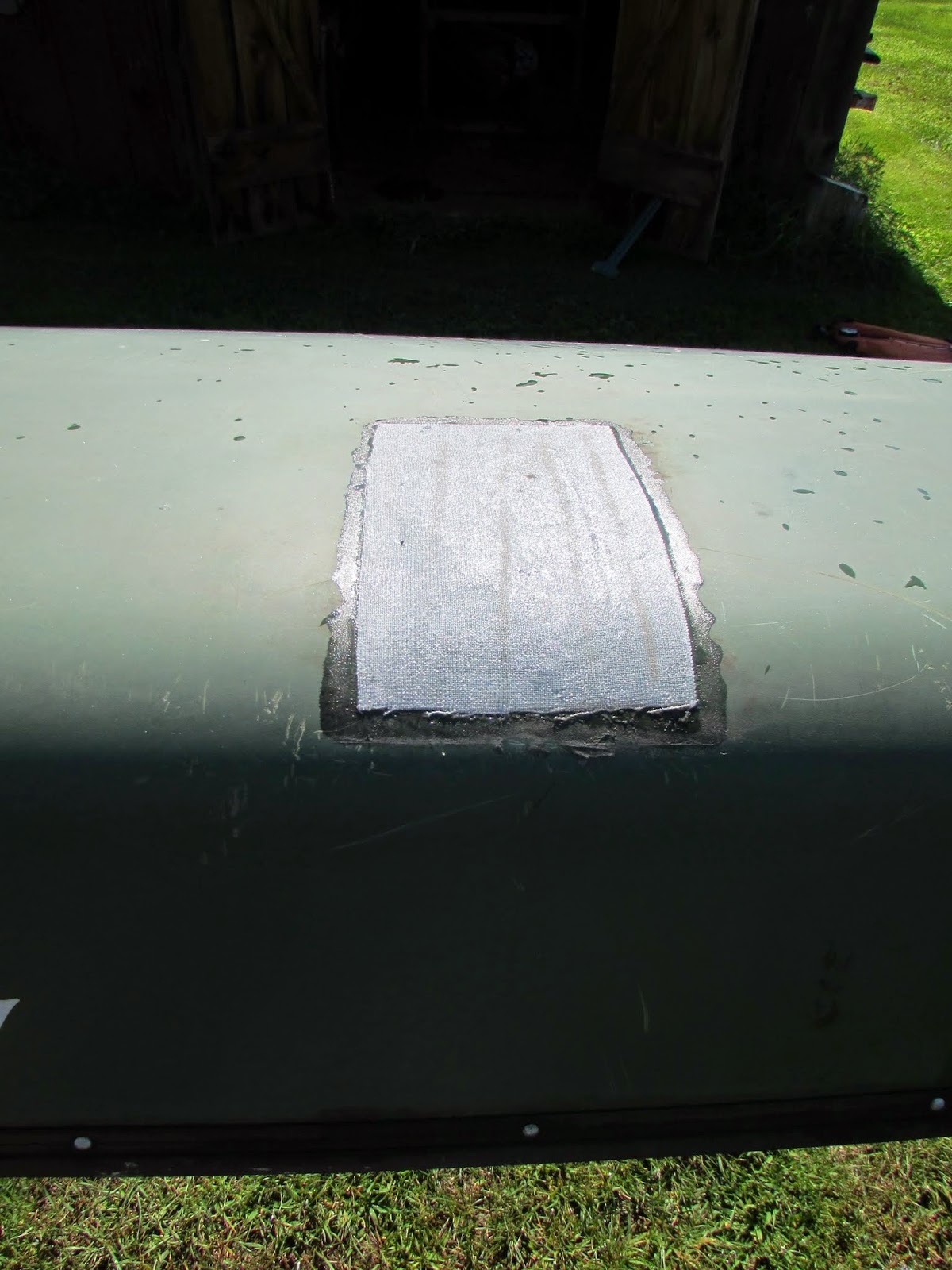 To the novice eye this probably looks like a mess but believe me it is clean as hell and will take only a little bit of sanding on the edges to make it smooth.  It's the third patch I've done with this stuff!

So next step was to sand down all the old patches.  Did I mention volcanoes?  These patches that were there were thick enough to pave an old road down smooth enough to skate board on after you took it all down!  S-glass was the underlying foundation which is good but the goop that was spread on top was a lesson in not HOW TO DO THIS!  Christ, I started with 120 grit and then said the hell with that and went to 80 grit and still had a tough time with getting it down to a level near the hull.  In the end I called it quits as I was getting to near the skin of the hull.  My plan is to lay a layer of resin which I may thicken a tad just for spreading reasons over each patch and call it good as they don't leak but need some attention.  I'm not adding new cloth as I think the existing bond is tight enough!

I was curious about this leaking problem and was wondering where it was so the only way to find out was to take the boat out for a cruise.  I didn't think it was coming from any of the existing patches nor from my new patch but had to find out!  I put in on the Contoocook River where I was kind of accosted by a party boat owner!  "Hey, ya gonna park yer car there buddy cause that's where I always park!"  Like the stupid ass owns the public boat ramp?!  Where's the freaking reserved sign for Joe Asshole was all I could think!  But even though I was kind of in a surly mood I moved my car into a shaded area and called it good.  The best though was his engine on his party boat wouldn't start and as I paddled off I could not resist to yell out, "Should have checked it before ya left home!"  I got the salute for that one!

Ok, out on the Merrimack I started looking all over for water leaking in.  I knew it would be a slow leak but a leak is a leak is a leak.  I had my thoughts about where it was coming from but I really didn't want to guess.  It only took about a quarter of mile to see it was coming from the bow where I knew two chips through the hull to the core where.  Slow but it added up pretty quick.  I made it up about a half mile and then pulled into a sandbar and flipped the hull as I was paddling it from the front seat facing the back and wanted make sure I was looking at the right end.  Yup! 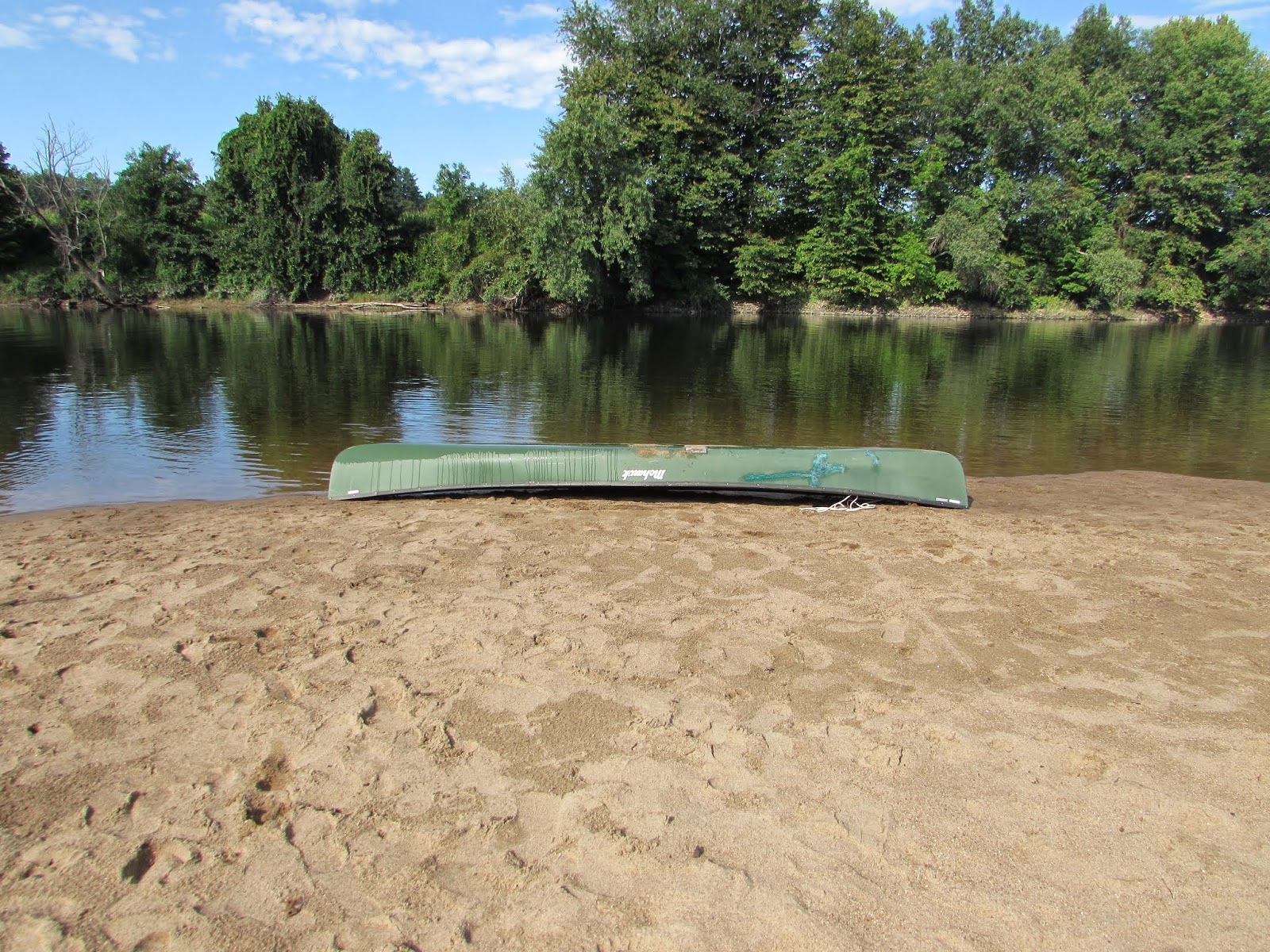 That is an easy fix but it will mean yet another paddle to test the new patch!  Oh man, this is just misery having to keep test paddling!

For a twenty-five year old boat that had a tree fall on it and twist it as bad as my back it handles really well.  The gunwales have an interesting turn to them from that event but all is good. Very light and tracks sweetly!  Nice and stable as well.  If it weren't for the inner kevlar lining I would be very interested in this hull but it is as I mentioned it is more like the chopper layup.
So a small patch and another chance to play with Peel Ply to patch these two minor holes and the of course the burden of another test run!  Oh my, how hard life is with these rebuilds!

Well I thought I had it all nailed down, no more leaks so I took it for another spin today but GODDAM IT leakes!  Within a quarter of a mile I had enough water to use my sponge to dry things up.  I kept looking down to see where it was coming from.  Damn, this is a frustrating process!  I pin pointed where water was coming in from on the inside but now need to figure out where on the outside it is coming from.

When I got back to shore I flipped the boat and looked long and hard, just the usual scratches.  So on the way home I hit the car wash and sprayed the hell out of that hull, inside and out!  I think my car was jealous!  Back at the shop I put it in the racks and waited for a long drying time.  Low and behold there are a shit load of pin holes in the hull and they all correspond with the places that were leaking on the inside.  I marked them with some chalk and then marked it out with masking tape for the job!

I knew where the inner hull leaks where but marked them with tape as I want to put a layer of resin on them as well.  In the meantime I am going to let this hull bake in the shed, it gets hot in there, so the foam core can dry out.  My plan is to lay a layer of resin over this whole area.  I marked out the area I want to address and am hoping I'm not missing anything. 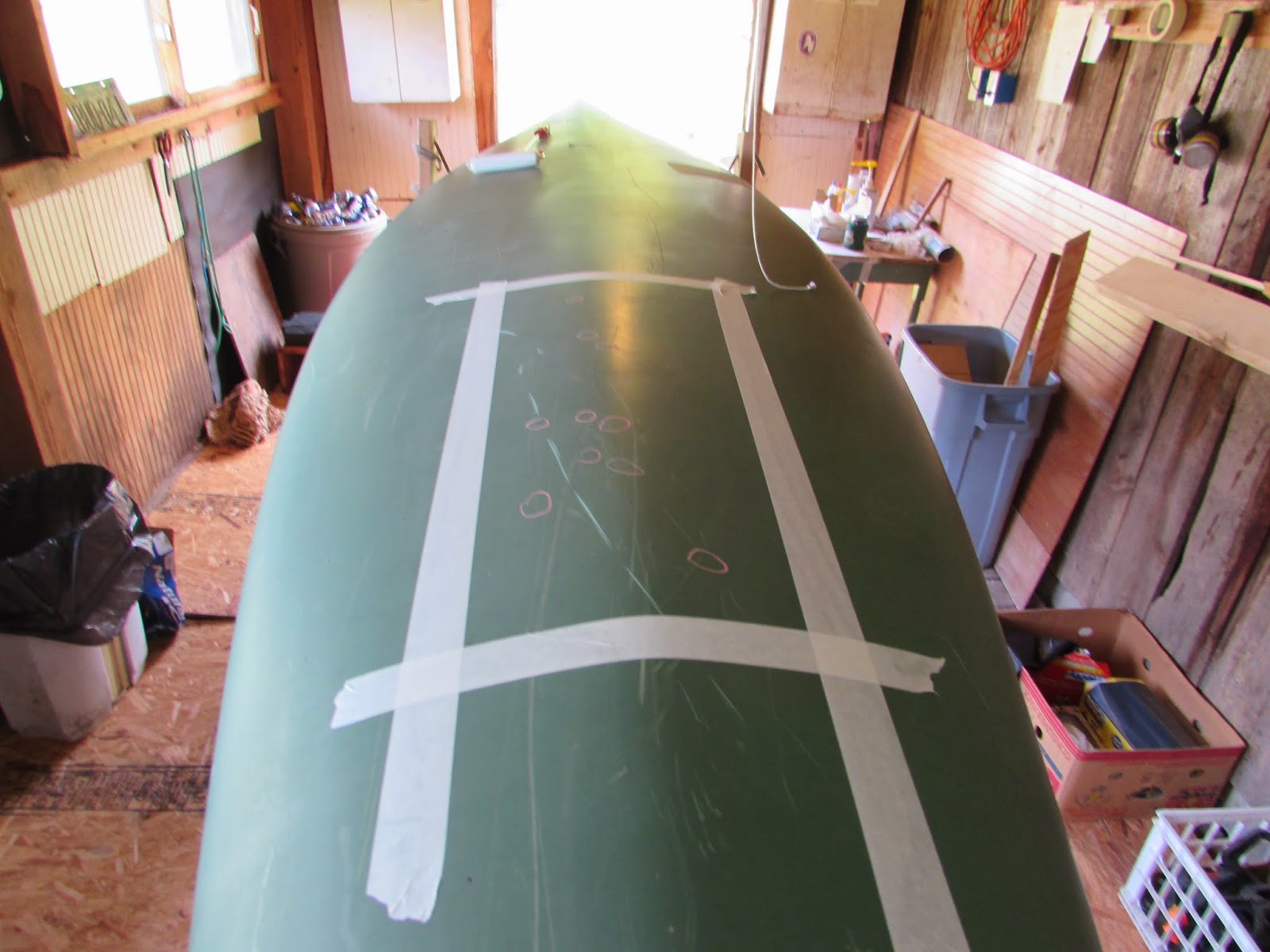 To do this I decided to try out a foam roller.  I have not done this yet but have read a lot about its application.  Sounds pretty simple to me but I know how this shit goes!  Usually it is dismall! 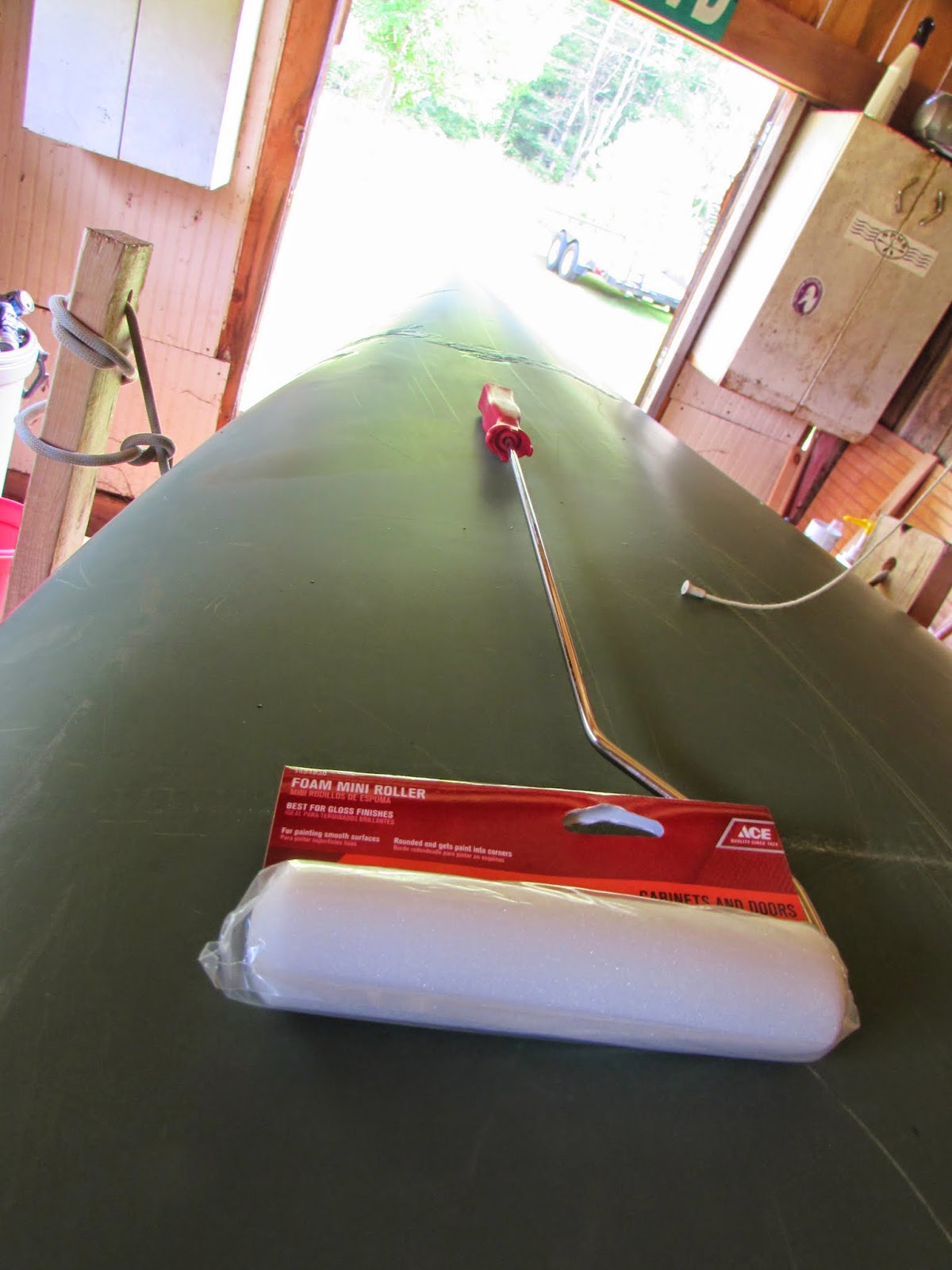 So a bit more waiting time before I can try to fix this stubborn bastard,  Damn, this is a painful go!

I had laid out two layers of resin on the pinholes after using a syringe to try to fill them best I could.  This morning I took it out to the confluence of the Contoocook and Merrimack!  Holy Shit, the rivers were cranking.  At the putin the water was about eight feet above normal!  I unracked the boat and put in and just kept paddling around the Tookie, I just didn't feel like fighting the hard current and kept to the back eddies for about an hour.  Not one drop of water leaked in so I know the patches are all good.

I think all I really need to do is a little bit of sanding and then fill the hole in the carry thwart with some G-Flex and this hull is done.  Nothing fancy as the owner doesn't care much about looks as this hull is pretty beat up.  Good to get it done though.

Although the patching looks like hell the Goober Boat was a wreak to begin with.  I finally, after two days of toting it around on my car hooked with the owner.  He was quite happy with the whole fix, please picture that every other word outta his mouth starts with F and I've known him for a long while.  All is good in his eyes and so it good in mine.  I think the best part was coming up with the moniker, Goober Boat!  Of course I didn't mention that to him but maybe I will.