Road Trip and Working On a Hull

After a few months of discussion it was decided I'd take a road trip to work on the Satan Boat, Rob Roy, at the abode of Mr. McCrea.  My plan was to steam bend some wood for the back cowling so I could attach the spray skirt, I was hell bent on it!  Mike on the other hand was saying install some snaps!  No way did I want snap on that, thought it would look like hell.  That would be decided later.

I packed and racked Friday night and somewhere around six or six-thirty I hit the road.  My route took me west to avoid Danbury, actually all of Connecticut, NYC and all of the tolls on I-95.  I headed out from Concord/Penacook on 202/9 to Brattleboro, VT taking I-91 to I-90 to I-87 to I-84 to I-81.  Somehow I missed I-83.  Of course just tooling along and getting into the driving mood doesn't help.

I was thinking since I've done this trip several times I should be there soon but kept driving!  A short time later I either A) see the huge sign saying Welcome to West Virginia, or B) crossed the Potomac River and recall saying out loud, "What the F!"  I knew I was in trouble which with my driving history of getting classically lost was soon to come to be yet another truth!

I looked for the first exit but damnation it was a long way down the road and for some reason I couldn't seem to get back on 81 not that it would have matter since I forgot the 83 part of the trip!  I now put my trust in the GPS!  Never again!  Recalculating the GPS kept saying, turn here, turn there.  Oh Christ I was so lost now I wouldn't know how to get back the highway if I tried.  I tried the cell phone to call McCrea, no signal!  Sometimes I was heading West, other times East then South and then North.  I must have crossed back into Maryland at some point and finally after hours of wandering I stopped at a store and one of the clerks wrote out directions for me including his name and phone number in case I messed up again.  I thanked him profusely and took off.  His directions were spot on although I did pass the road McCrea lives on and had to back track yet again!

Now during this time span I finally got a hold of McCrea.  Went kind of like this!

Mike:  What state are you in?

Ya know technology is, I guess a good thing, but I need maps!  I'm so old school just having a map to see where in the hell I was would have been a blessing!

Well, I finally pulled in just a mere five or six hours late.  I was pretty frazzled but managed to stay up late enough to do damage to the cooler while I off loaded some Phase Three seats, some left over carbon fiber plates, a back band that had exchanged hands I later found out six times as well as other items.  Now one item happened to be a new carbon fiber paddle still in the box that I had purchased through McCrea.  I was pretty excited about this!

Opening the box I looked in to see some paddles in the darkness of the box still in plastic wrapping.  Oh Ah, Oh Ah, like a little boy at the candy store!  I pulled them out one at a time and thought to myself Geez, that's kinda heavy for carbon fiber, then pulled out the second.  I pulled them out of the plastic and was dumbfounded!  Here's what I was looking at! 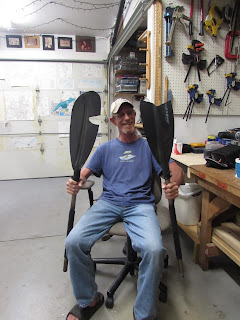 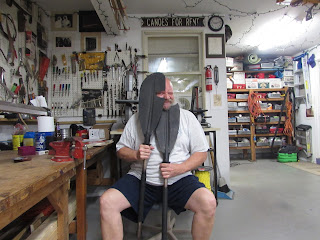 McCrea has a twisted sense of humor.  After my extended drive I was beat to hell and found a place to crash for the night.  I don't think I lasted more than ten minutes before I was out cold.

Over coffee we talked about how to tackle the messed up back deck.  I really wanted the ability to put a spray skirt on this boat for rain, not whitewater.  I had brought my whole steaming setup with a piece of poplar which we would router.  Sitting there looking it over I finally decided to go with the rivets which almost put McCrea into a gleeful laugh and dance! The angle of the back deck that Bell came out with on this hull is...well...nuts!  Almost a forty-five. 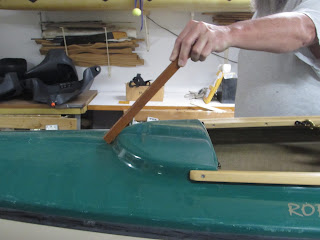 The quickest and most simple way would be to add three snap rivets.  We had a piece of dry bag cut off left over to use for the test piece and McCrea broke out all his rivet stuff.  I sat there as he heated up a nail to punch through for a hole, watched as he broke out the hardware and figured out how it works and then watched him assemble it all.  When he was done I asked him why in hell he had put a grommet in?  We wanted a snap in it!  There were some swear words but not from me, I was laughing to hard!


After a search for the right hardware there was a spell of, how do I politely put this, old age kicking in.  Mr. McCrea had done the snap rivets before but it had been a few years.  I have never done it.  It took a bit and then finally looking at the boxes illustrations to see how it went together but by Gawd we got it done although there was a lot of reminding to each other to make sure we had the right side up on the spray skirt.

Me: Is that the right side?

McCrea: Yeah, I think so!

McCrea: I think so!

Damn, it's always good to have two sets of eyes sometimes!  We did install them pointing the right way but it was a crap shoot for a bit and hell that was during the coffee stage of this day!

With that done and out of the way we decided to move on to adding the skid plates.  As usual we used Dynel with a mixture of resin, 105/206 and some G-Flex mixed in.  This mixture is one I've touted about in the past and am sold on it.  It is rugged as hell!

Now making templates for skid plates is tough, in this case the Rob Roy has a very sharp and narrow bow and stern.  In the past I've used old T-shirts cut up.  McCrea had plenty of assorted rags which we ended up using.  Laying it down, stretching it out and tracing a rough line was a good start.  I ended up trimming that down a couple of times asking Mike to take a look.  I tell ya having a second set of eyes during shop work is invaluable!

When it came time to lay it up McCrea suggested with an air of authority to draw a line down the middle of the Dynel as a guide!  I thought this was bordering on genius as I never had thought of it only to later find out he had come up with that idea a mere minute before.  Regardless it worked!

Now came part of a discussion about painting the bottom of the hull when I got home.  Despite being an older hull and in pretty damn good condition I felt like I could paint the bottom but over time it has faded a little.  Not the white of a  new hull.  What was pointed out was the decals.  I wanted to just cover them with blue tape and paint but the backing behind it would be a different color white.  Damn.  So, like with the Lettman rebuild we decided that the skid plates would look good in black.  I am partial to that look!

The previous patch job was not too bad but there were areas that you could fit a finger nail under and so a quick sanding was needed.  Using an RO sander and two twenty grit sandpaper made a quick job of it. 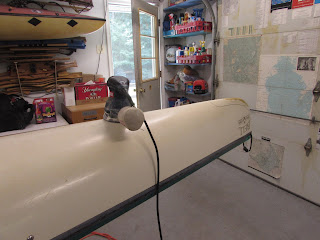 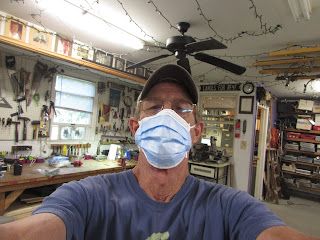 With the hull masked off with newspaper I got to resining.  We used some graphite powder and some black paste, whatever the hell it's called.  From doing this in the past the first layer on the hull is not a true black but it is a start.  The Dynel will turn a true black with added layers of resin.

This time around I used a roller vs a brush as I think it forces the resin down into the cloth better and has a cleaner look.  Now with the sharp edges of the bow and stern we ended up using tongue depressors to force the wrinkles out as the resin set up.  I'm now a fan of those and will be picking some up for future resin work.  A few pictures of the layup. 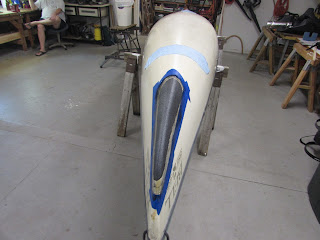 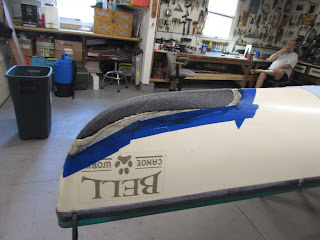 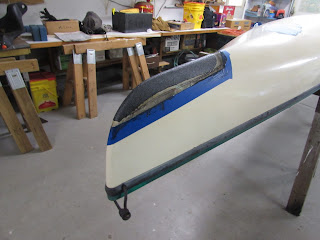 Now it was a waiting game so it was time to move on to the next project, steam bending wood.  I had brought down all my steam bending stuff including a piece of poplar cut to about one inch by three quarters or so and five feet long.

To make a long story short for some reason the wood was taking too long to bend.  What should have taken thirty to forty minutes lasted over an hour and then the wood broke on a test bend but not before splitting the sleeve and running out of water and starting to burn the can.  It was a bust.  We got a partial bend but that was it.  Very disappointing considering all the successes I've had in the past.

By now it was time to pull the peel ply.  Usually I wait overnight but I had used 206 hardener which cured quickly and after some banter back and forth we decided it was time.  It came off nicely but I was a little disappointed in the masking job we, I did which left a gap between the cloth and the hull. 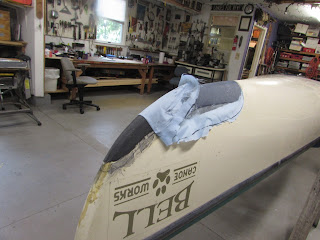 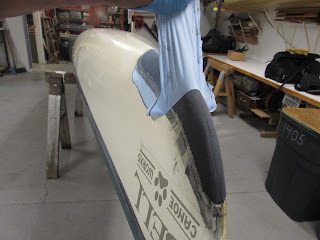 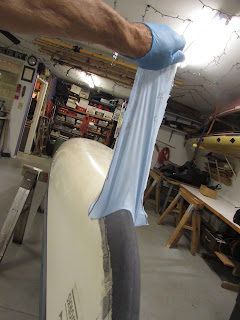 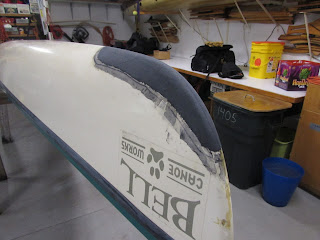 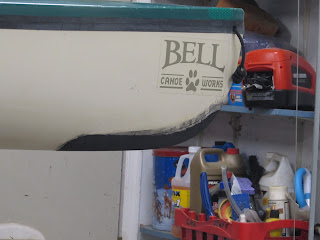 I was happy with the skid plate but not so about the excess resin on the hull so a paint job when I get home will be in order.  Not the end of the world.

Up at fourish in the morning.  We had talked about going to a diner the night before but I was hell bent on getting on the road to beat as much traffic as I could.  Racked and packed and hit the road by six-thirty.  I must say PA has some very terrible roads and I was glad to cross over into NY.  In all it was a nine plus hour road trip home.

As usual shop time in the abode of Mr. McCrea is a pleasure.  I almost exclusively work solo so it is always great to spend time with someone who knows what the hell they are doing when it comes to boat work.  I do think if we did live closer we would most likely get into a hell of a lot of trouble together!  I look forward to the next time we get together for a shop project Mr. McCrea!