My buddy Scott has had this Marinor kayak for as long as I've known him.  Well used and put away wet at times.  Last winter it got hit by a snowplow and some damage was done.  Not through and through just a lot of cracks.  Scott was not going to have time to fix her up for the annual Gentlemen's Trip to Lake Umbagog.  I am currently rebuilding my OT 158 to give to my grandson but it is all bright work which amounts to nothing but sanding, varnishing and then some web work to make seats again.  But Scott's boat will be a project.  Proof is in the pudding so here's a few...um...a lot of pictures of the patches to some. 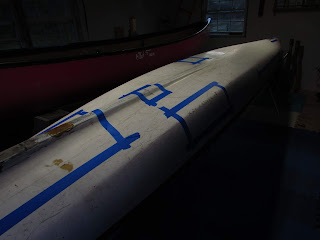 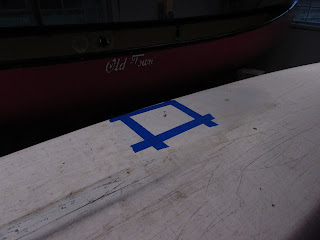 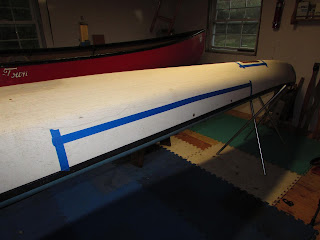 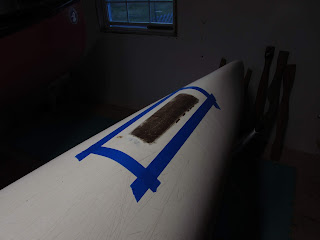 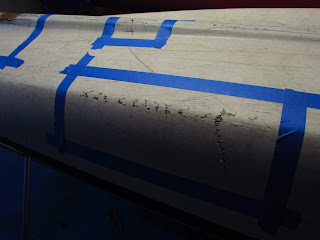 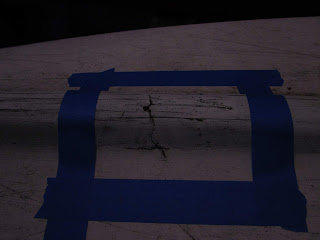 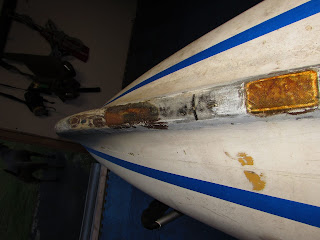 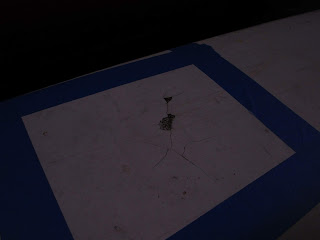 Knowing Scott's paddling habits I'm using Dynel for most of these patches.  For where most of the damage is down the road Dynel will hold up much better then S or E glass. I have to have it done before September Twenty-Seventh for the trip. Sunday is the date begin.  So for now

Before I can begin the patch work the boat needed to take a bath or in this case a shower.  I use a Dawn  dish washing detergent mixed with vinegar to cut through built on grime and grit using a green scrubby to do the cutting.  I got it really clean with some actual white showing!  A half hour in the sun had it dry.

Looking at some of the existing patches Scott put on I got out my RO sander and using one twenty grit paper smoothed out all the edges and then the tops.  A quick rub down with some more vinegar and a few minutes and it was time to pull it into the shop.

Now this boat has got a little bit of chine to it as well as a keel kind of thing.  Anything wound that is on the bottom or the chine I will be using Dynel with a covering of Peel Ply to smooth it out some.  Anything above the chine I will be using E-glass. I got two patches on today between ripping down the carport, forking around with moving two by sixes all over gawds green earth for future use.  I just plain ran outta steam.  I'll have to add some pictures later.  Only six more patches to put on as well as taking out the foot peg rails.  I am thinking I could have most of that done tomorrow. So....