I've been reading up on this for quite some time now and after a good friend got me a vacuum pump for free I finally pulled the plug and bought the rest of the equipment I would need, meaning about four dollars worth of hose that would fit the nipple and then some dollar store plastic lidded containers and some double sided tape. My plan is to, for first attempt, use materials I have on hand.

First task after fitting and cutting the tubing was find a way to attach it to the lid of the holding tank, the cheap container which will act as a reservoir for excess resin running out of the hose, the pot.  I need to put a layer of sand in the bottom to act as an anchor to hold it in place as the hose is big and has a tendency to twist to where it wants.

My first thought was to put some Gorilla tape on a portion of the lid and then cut an X into it which the hose would push down through.  Oh yeah, it worked but left enough gaps that it would sound and act like a sucking chest wound.  Nope, not gonna work.


Back to the drawing board.  Since I had bought a slew of these containers I had extra lids to play with so second attempt went much better.  More Gorilla Tape then attempt one and I decided to heat a bolt and  melt my way through about the diameter of the hose, this of course took several melting sessions to get it tight but not to large and of course that is about when the battery in my camera died.


For the record it worked just fine.  I melted a hole for two sections of the hose, the one coming from the bag to the pot and then one to the pump for a continuous flow of air.

Next step is to start making the bag which I'm going to try using four mill plastic I have on hand, double sided tape but am thinking I might need to pick up another nipple to build into it.  Will it work?  I have no idea but that's what I said about steam bending wood.

It warmed up enough today to fire up the shed heater and give a go at making the bag. It was three degrees in the shed and a balmy minus two outside when I started, had to wait for the shed to warm up to at least fifty degrees before I could start.

I had gotten all my parts together ahead of time, three pieces of six by six carbon fiber squares,  the backing I thought I would need for the air hose and enough three mil plastic cut out to form the bag.

Took the whole mess down to the shed and cleared off my workbench, the setup takes up a lot of real estate. I layered up three pieces of Carbon Fiber and liberally doused each in resin and then put it in the bag and got the pump going.  First problem was the hose kept sucking the bag in clogging it.  Grrrrr!  I ended up sticking the hose through a piece of rigid foam I had and that helped.  Let the pump go for about four hours and called it good.  I brought the bagged piece up to the warmth of the house and let it sit overnight. 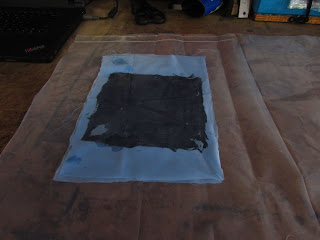 When I opened it in the morning there were areas that were starved of resin and despite having strength was a little brittle.  Guess I need more resin.

With a few days to think things over I knew the problem was the stem valve in the bag or the lack of a proper one.  I looked up on several sites about that piece of equipment I needed and it was at a price being a cheap ass Yankee I didn't want to buy one.

I found a DIY site that listed how to make one on the cheap and I went for it which caused me a bit of grief over a nut, a freaking NUT!  I used parts intended for air compressors for the nipple, a couple of large washers that would fit the threaded part of the nipple with rubber washers onto that.

The idea is that once the nipple is pushed through the bag with one set of washers on the outside the second set is placed on the inside of the bag and then tightened down with the nut.  All good in theory BUT I couldn't find a damned NUT to fit that threaded part of the nipple.  It was causing me a lot of angst!


On the third trip to the Box Store I finally found it, a five-eights inch nut with a plastic thread built in.  After looking at the store bought on I also bought and extra size washer.  This comes into play in a few minutes.

My thought was using these pieces I bought for the grand total of seven dollars and fifty cents I could make a knock off of what is pictured above.  From what I could glean from websites is that the base of the store bought one has a way of allowing air to flow into the suction tube without allowing the plastic to suck in as well.  I did the same with the large washer, the nut and a couple of small nuts that have been kicking around for years and a little E6000 adhesive. 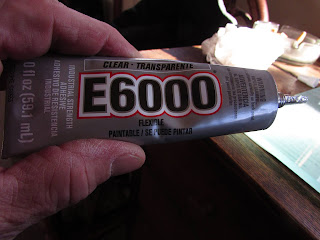 Basically I glued the small nuts to the extra large washer and then the nut to the the top of those to create a gap that will allow air in but not the bag as the base washer should hold it down enough.

Hell, it makes sense to me and dammit it cost seven dollars and fifty cents for the whole damn thing! 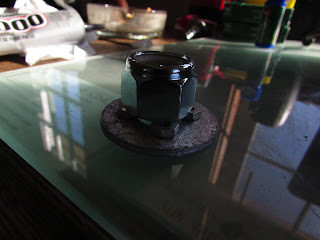 I'll leave in the warmth of the house to cure.  And the next pics are of the assembled suction nipple. 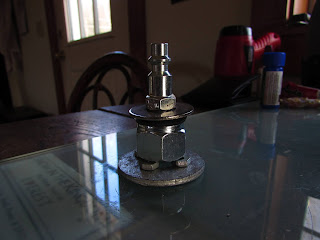 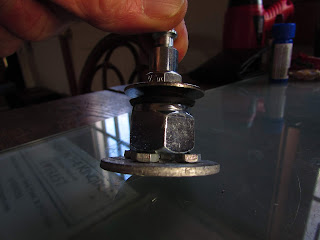 I did spend time in the shed, a heated shed by golly, and constructed a bag for the Carbon Fiber plates I'm going to give a try at making for deck plates.

Today was attempt number two with the new valve design.  This time I used four pieces of carbon fiber and was more than liberal with the resin.  Vacuum bagging is kind of like painting a wall.  Lots of prep time and then sitting back and waiting for it to dry!

I had already made my bag sealing up all but one side which is a mistake.  I think if I had left at least one of the two sides I had sealed left open it would have been easier to get the piece into the bag.  Live and learn.  The first thing I did was to apply some Gorilla  Tape to the inside and outside of the bag for the valve. 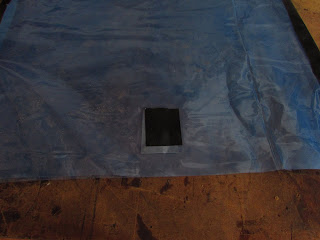 My plan was to use a metal washer with a rubber washer on each side of the bag for a good seal.  Gotta love a theory but the problem was it proved to be to "thick" so the thread on the valve wasn't deep enough to fit in the nut.

I said to hell with the outside washer and decided I could seal it up with Gorilla Tape which worked.

In hindsight I wished I placed it nearer to the corner of the bag which I'll do the next session.  My next step was cutting out carbon fiber pieces about ten and half by eight inches.  My last try I used two pieces I think so this time I doubled it.  Also on the last try the carbon fiber was a bit starved of resin so I really laid it on thick this time. 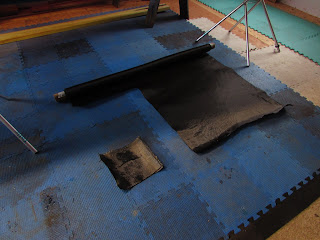 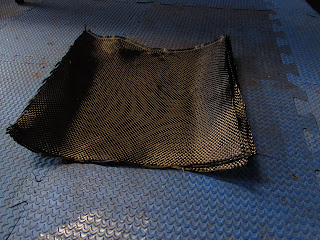 So this time I decided instead of just plopping the CF onto waxpaper I would use a piece of cardboard with the waxpaper on taped on it as a release which I've used for many years now with success. 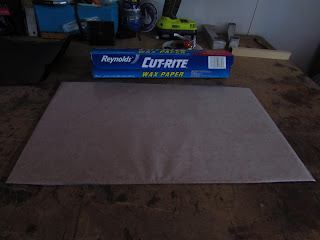 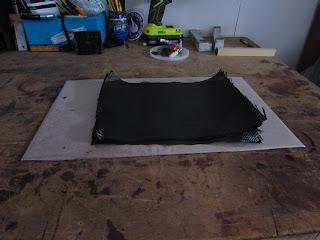 After I got the resin onto the CF I put a layer of Peel Ply on top of that and than a layer of breather cloth, in this case since I read up on this some material for stuffing pillows and then sealed it all up with more Gorilla Tape.

I hooked up the pump hose and flicked the switch and it was amazing how fast the air was sucked out of the bag! 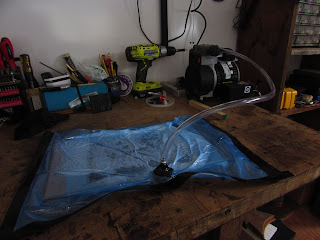 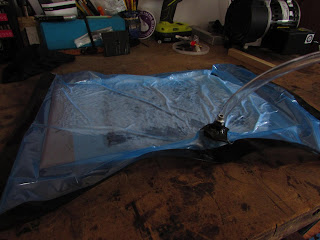 This is where the placement of the valve is important, another live and learn thing.  The valve and the edge of the resin soaked CF met.  Also, I need to make one more modification to the valve at some point as the plastic bag despite the new design made its way into the valve on one corner.  More on that later.  I was pretty happy with the way it all worked but have notes on what to not do next time.  A couple of pictures of the valve under pressure! 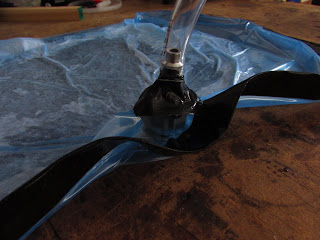 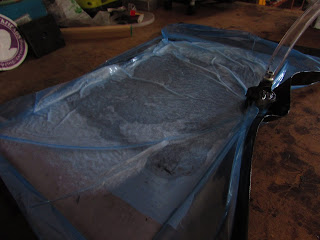 I left the pump going for about four hours while enjoying a few cans of liquid courage.  I was pretty interested to see what the results would be as the first attempt was too thin and starved of resin.  The one thing I kept my attention on was to see if any resin was getting sucked up the hose, not one drop!

I did bring the whole bag up to the house and left it on one of the heat vents for a few hours before I opened it.  I had to use a knife to separate the CF from the waxpaper, next time I will use Peel Ply on the bottom as well.  I was actually a bit disappointed that regardless of using extra pieces of CF it was thinner then I expected.  Certainly good for something but not for a deck which was my intention on this process and if my eyes are deceiving me it looks a bit starved of resin in a few areas. 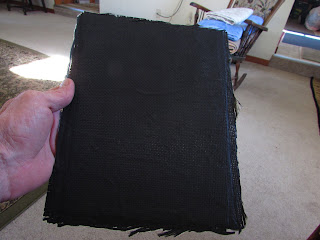 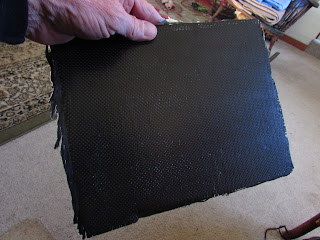 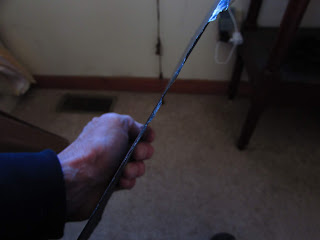 When did this without vacuum bagging and just weight on top of he CF it came out much thicker.  So I think it might be back to the drawing board for some modifications and figuring out the amount of layers I need to put on to make a stronger piece.

I kept thinking how the bag keeps sucking into the valve and decided I'd try yet another approach to that whole setup.  Using some fairly heavy wire I cut small pieces after I had bent them into an arch of some kind and then using E6000 adhesive secured the top of the wire to the nut and then the bottom to the large washer to form an extra barrier to keep the plastic from getting sucked in.

I have absolutely no idea of this was a total waste of time and materials or if it will help.  I will find out as I'm hell bent on getting another trial in but this time I want to fabricate a set of new deck plates for my MR Courier.  I will be using the surviving plate as a mold, so to speak, and have a plan on a release agent and will be keeping my fingers crossed that it works.


Crappy weather tomorrow so that will be a good day to hucker down in the shed and do some resin work/experiments!