The Shelter From Hell

I have been wondering how I am going to store my canoes for the winter as I need to work on a few of them.  In the past I have stowed them outside, in the barn, in the barn loft, in a leaky shed.  None is a good solution and I have limited space to work so it has become a problem and I curse a lot about this.  I sure do a lot of cursing and have become quite a master at this art.  You know you are good when you can get several paragraphs out of your mouth and stun anyone within hearing range of you.  The biggest trick is not to repeat the same words within sentences.  It is truly an art!  And besides I like cursing it makes me feel better for a few seconds.

So, when a good friend calls me as says how would you like a 12' x 12' x 24' portable carport for free I was all over it!  Hell, the perfect answer to my storage problem.  Now like most things free there are caveats.  This was bought several years ago, it had never been set up, it had been handed off to a few different people and of course there were absolutely no directions!  Let me please repeat that, NO F'ing DIRECTIONS!  The writing is on the wall for a fiasco!  Hell, I'm not good at shit when I DO have the directions!

Scott graciously offered to help me figure out the frame, we only made a few mistakes which were easily corrected later.  After that part was done I searched on the net for info on this carport and found that the company that made it was bought out by another company, kinda like my mortgage, and directions for installation were for newer models!  Hell, I even emailed the bastards and they didn't have any help for where I am now, stuck because they only have directions for the newer models.  Go figure!

My problem is how to attach the door and the end wall pieces.  It has become a conundrum.  According to the video link I was sent, which is not this specific structure, I should be able to have it up in about 2 hours.  If I figure this bugger out before snow flies I'll be mighty lucky.  There are slots cut into the fabric to accept something but what and how?  There are turnbuckles for tension but where do they go?  There are anchors but not enough so now I have to come up with some way of making some in addition to what came with the kit.  On top of that there are sleeves to accept some kind of rod but they aren't there, more headaches down the road!

What I really need right now is a bulleye target stapled against the wall to bang my freaking head on.  That would feel a whole lot better then trying to figure out this mess.  But it was FREE!  Damn, doesn't that just make all the difference in the world!  Now, where the hell is my can of liquid courage?

Well it has been several weeks since Scottb and I put the frame together.  Seems that Mother Nature decided to keep a steady blow going and the winds were fairly hard.  Today's weather called for almost no freaking wind and I was at it early.  The frame was up and I ended up getting the end pieces on without to much jury rigging.  Damn I sure do wish I had directions as I know I'll be revisiting some of the steps to tweak it some.  Also, this sure as hell ain't a one man project but can be done solo!

After I got the door and back wall up I started the old kicking scenario to get it squared up, seemed like 27 hours later that I got it right.  I called it good when I got it within an inch and a half.  I then added the anchors but I do know that I need to add some more down the road.  The winds out my way are pretty steady most days.  Now my soil here is sandy as hell one inch below the surface so I'm wondering about how solid these anchors are going to be.

I kind of feel like I'm putting up a giant kite but what the hell, ya gotta take a few chances here and there.  I decided to add some extra reinforcements using straps and some rebar pounded into the ground which will happen after my neighbor helps me cut the rebar and bend it into a U.  The straps are hooked to the frame with eye bolts.  Now make sure you tie a freaking knot in the end of the strap before ya pull it all the way out, nothing but a PITA to get it back into the bracket. 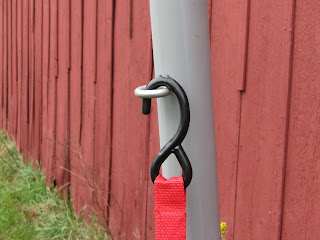 Next I got the top out.  Holy Crap, it's huge!  How the hell am I going to get this monster over the frame was all I could think.  Break time!  A can of liquid courage, some raised eyebrows, and some gray matter churning like a blender on high speed got me through it.  Three step ladders later I had it pulled to the ridge line and started down to the other side.  Tied off from the freshet of wind that was making it's presence I started the effort of disassembling the horizontal bars at the bottom to slide through the sleeves on the bottom of the top piece.  Now, I know this was free, a pain in the ass, no directions, causing me a lot of grief but the icing on the cake was trying to slide those poles through the sleeves.

Now I've mentioned cursing here before but I was quite proud of the words that spewed from my mouth today!  Those damn sleeves must have been glued together or something cause the freaking pipes just would not slide through.  Grunt and kick and swear and go inch by freaking inch until it broke through the opposite end.  I swear if you were driving by you would have seen a man pounding his head and fists on the ground.  Would have been enough to make you step on the gas pedal to get the hell away!

Finally done I had to step on all the cross pieces to adjust the top.  Back and forth more times then I could count and I called it good and tightened down all the bolts that needed a wrench put to it.  Another can of liquid courage saw me to pulling, tugging, grunting and yes, a lot more swearing before I got the top somewhat stretched out but it will need more tweaking to get it the way I want it.  More hands is what I need.  Tied down and just waiting for the rebar part to happen and it will be a new home for the canoes!

What a beautiful day it turned out to be.  One week ago I had 17" of snow littering my abode creating havoc on the whole Northeast.  The new shelter held up fine but it did bow down some due to the heavy wet snow we got.  In the end I used the snow rack from the inside to get the snow off and that was a PITA to do.

This morning I decided I needed to tighten up the cover and add some more protection in a manor.  First off I bought 4 new turnbuckles for the lines to the top cover.  I pulled and pulled and pulled from all sides and got it tight and then tied on the ropes to cinch it down to the new hardware and got it tight as a drum.  Sweet.  Next I went into the barn and got out the leftover paneling that I have been moving from spot to spot in the barn for the last 9 years and slid them in between the frame.

I slide in some 1 x 3's to help support it and ended up buying some 1 x 4's for the rest of the job.  Goddamn, the price of wood sure went up as those cost me 54 bucks.  My thought is that this will help the future snow to help slide off the structure without so much bowing of the material.  We'll see how that pans out.

Nothing is secured for now as I want to wait for the next snow load to see what I have to move around.  The one thing I did do was to put duct tape on all the edges to ease any play in the tarp so it doesn't wear or tear.

So, it's tight, seems to be weathering the weather quite well and WTF it was FREE.  My next project is to build a rack that will hold all four canoes taking up minimal space and I have a plan for that.  Gotta love plans.  It will be interesting to see how this holds up during this winter!
Posted by Scooter at 9:32 AM