A plan is a plan and one of us got it all together for a meet on the Nashua River.  Now this is a river I have run before but it's too many years to count from then and now.  I picked up Scott at his house and we were soon on the road.  Now, if there is one thing that I am consistent about it is getting lost driving!  I was thankful to have Scott along to be the co-pilot and guide me.  As we neared our exit we both got a little preoccupied and as I looked up I said something like is that our exit?  Both our heads turned as we looked at the sign as we passed the exit.  Yup, stated my co-pilot!  Shit!

So off the next exit we turn and follow the road back to the highway only to pass the road we needed to take to get to the meeting place!  Shit again!  Back on the highway and another exit where we somehow got onto a different route then what we were on!  Christ, I honestly don't know how we found the damn place but we got there just as the others were pulling in.

It wasn't long before we were off loaded and setting up shuttle.  I believe it was Jeff B. who was going to shuttle us back with his van which of course wouldn't start once we were all ready to get in.  The real beauty of that was we were parked at the Automotive Section of Sears so if push came to shove ... although Jeff did mention something about how his wife wouldn't be too happy.  After a bit of Car Talk chat it was jumped and off we went and the shuttle was finally done.

The put in was pretty over grown but hell a put in is a put in and we all made the best of it.

We soon had our flottila on the water and were heading out.  So here is a list of the crew and boats.

Scottb in his Mariner, myself in my MR Courier aka the Colander,  Canoedad in his 17' MR Explorer, TommyT in his Blue Hole, Jeff B and Erik E. in an OT Applacia, Jim C in his Prospector, and Bill aka Wet Willie in his Octa.

We came to our first blowdown river wide but there was a sneak route on the left.  Several of us made it through but somehow Tommy got hung up.  With all the trees in the way I didn't have a good view but it took a bit for him to get free and I did see a rope thrown from someone to help pull his hull back upstream. 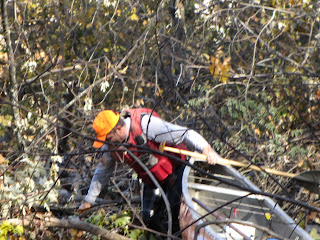 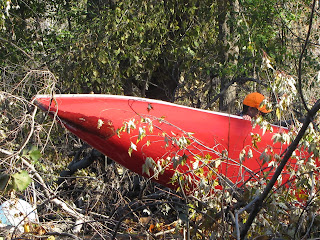 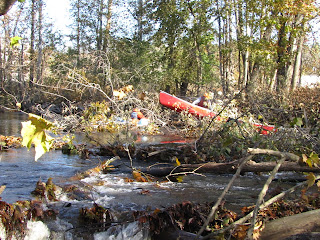 No damage done and no one hurt and we were soon on our way again with a lot of laughing going on.

The next river obstacle was a broken dam and according to Old Bill from Pnet it was probably Ice House Dam.  I think I forgot to mention the river was up as I recall the last time I ran this I broke a paddle on some rubble.  Not this time.  It was gushing good and Tommy made the first run. I was hell bent on portaging it but after a few seconds of careful consideration and no look see I went next.  I got to far over to the right and got sucked into the wall, bounced off that and right into the standing wave at the bottom of the drop!

I watched as my bow dug in like a bomb had gone off on the bottom of it and left a big stinking hole and in a second I was almost gunwale deep in water.  There is nothing more miserable than trying to paddle what was seconds before a canoe and was now a filled up bathtub to shore!  All I could do was this almost obscene gyration of hips to keep from flipping before I reached shore and all I could think was that I did not, I mean DID NOT, want to go in!  Tommy helped me as I reached shore and I slowly started emptying my boat while the rest of the crew came through.

So, here's what I have learned, yes, there is always a learning curve, make sure your drybag is really tight before you clip it in.  Most of my spare cloths were a little damp.  Make sure your 5$ sandwich for lunch is in a better place than your cooler.  Should have taken my 5 bucks and thrown it into the river.

I wish I had more pictures of the others running it but others in the group got some good shots which are linked here.
http://vimeo.com/31699294


Bottom line is every open boat became a bathtub.  Both kayakers came out unscathed, there were, technically, no swims but there were some Soggy Bottom boys after that run!  I had to take my boots off and empty them!  Hell, it was a blast but I did notice that there were no takers for a second run!  After everyone bailed their boats out we got going again only to pull off on a sandbar for a lunch break.  My lunch was a 12 oz can of suds, bummer.

Back on the river again we came to the powerlines were there was some fast water and there was a lot of playing around there. 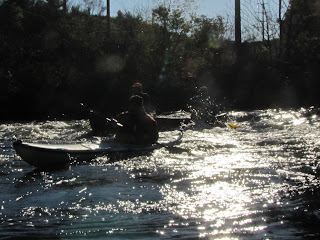 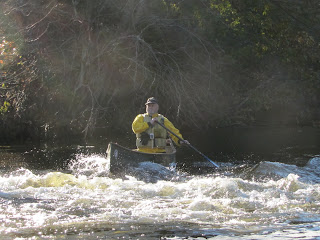 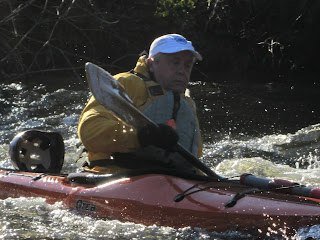 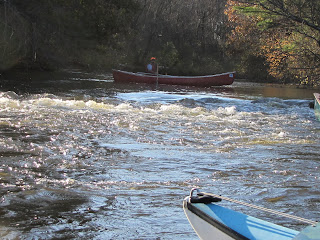 Now somewhere along the line I pulled into an eddie to take photo's and I guess Scott motored on past and here's where the story gets hazy for me.  I pulled up to the iron bridge which was our take out as the rest of the boys started pulling in.  As usual we started carrying our gear up to the cars and when all everything was up there except for Scott!  WTF, where the hell was he?  Ya gotta love technology and I called him on his cell phone but no answer.  A minute later he called back and it went kinda like this:

Did you pass an iron bridge?

Maybe, but I can see the road.  Maybe I can head back up to the iron bridge!

How far down are ya?


So, Tommy and I headed down to the next junction and kept looking for Scott as we passed by the river.

I saw Tom's car go by, I could see his canoe.

Ok, head downstream cause I'm heading back up to the takeout.

I saw Scott and blew the horn a shitload of times and drove to a farm stand where he could pull out.  All was good!  We loaded up and headed back north, not getting lost this time, and after I dropped him off I headed another 15 miles or so north to home.

As I get up to speed I hear a little thumping sound but think nothing of it as I have a lot of gear in the car.  At the tollbooth I notice that my canoe is kind of slumped over to the side, being loaded on the racks on the passenger side, and pull over to find that one of my racks had slipped and was loose, of course the front one.  It's one of those ratchet kind and would have to off load the boat, screw around with it in the dark and then reload the boat.  That ain't going to happen.  I hammered it back into place with hand, I'll pay for that tomorrow, and ran a rope from one side to the other through the car to get me home.  If you ever have to resort to this please make sure you place your knot on the opposite side of the car.  Damn thing kept slapping me on the side of the head.

So all in all it was a fantastic run at great water levels, no one swam, we had a few misadventures that were just inconveniences, and we met a bunch of folks who it was great to put a name to a face deal!
Posted by Scooter at 3:01 PM