A November Run Down the Saco

November and we're still paddling.  Woke up mighty early, 330 or so and instead of fighting the urge to go back to sleep I got up and meandered out to the canoeshed.  I needed to figure out what the hell was wrong with my front rack.  The ratchet on one side wasn't working very well and was stuck.  I got out my trusty can of WD40 and sprayed the hell out of the whole mechanism and waited for a bit before I started working it back and forth.  I mounted it on the car and it finally worked the way it was supposed to but I have lost faith and need to start looking for a new set.  I curse the day the car manufacturers got rid of rain gutters.  Life with racks was much simpler when they were around.

So the plan is to find a put in somewhere on the Old Course not far from Charles Pond and make our way the Hemlock Covered Bridge for the first night.  There's a nice lean-to just downstream of that to hole up for the night.

A 6:30 meet at Aaron's house and we were quickly on our way.  The drive up is beautiful, through towns like Moltenboro, Tamworth and others that sit on more rivers and lakes then you can count.  At a pit stop we decided to forget the plan to start on the Old Course and head for Swan's Falls and make our way down.  No sweat as the weather was spitting rain and we knew the way.  The problem with the Old Course is that it seems to flow into the Saco from Kezar Pond but also can flow upstream when the water is high into Kezar Pond and we didn't know which way it was flowing.

We got to Swan's Falls to find it gated off.  WTF is what we all said so it was off to Canal St putin and sure enough it was gated as well!  More swearing but it was a much shorter carry so we did it and then ran car shuttle.  Yup, it started raining of course, just like last year, and we took off for the Old Course. 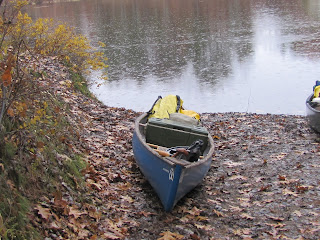 History repeated itself and as we got near the Old Course the sun came out.  The current was slow and flowing into the Saco and it wasn't long before we made it to the lean to.  It really is a nice site.


We made ourselves at home and I ended up taking a nice long nap, something I don't make a habit of but damn it sure was nice to be able to do!  I guess I was out like a light for around three hours.   Later a fire was started and as usual with Scott along it was a biggin!  He isn't shy when it comes to making a fire!  I heated up my stew for dinner with a fresh loaf of bread on the side and the remainder of the night was spent telling tales and swilling beverages! 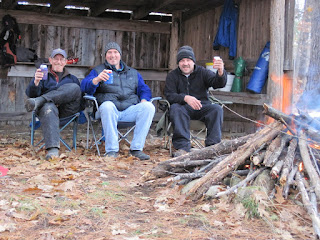 Saturday morning was a relaxed sort of affair.  Breakfast, slow packing up and finally on the river.  Of course there was a headwind when the weather had called for a tailwind but it really didn't matter all that much.  Now this really was the true maiden voyage for my Eclipse, sure I had had it out a few times already but without a load and I really wanted this for one of my tripping boats so it was interesting to see how it handled.  I had perhaps 80 pounds worth of gear, most of that in the cooler, and I found her to handle very well.  Built along the lines of the Malecite I did have to plan my turns a bit more then my Disco or Courier but she did well.  I didn't feel any problems with tipping it to it's side and actually once the chine cut in some I did even better controlling it.  I deemed this boat a keeper!
It was fairly early in the day when we made camp in just about the same place as last year.  We turned it into tarp city to block the wind and got ourselves comfortable.  Some of us took naps, others meandered around and collected wood.  I opted for a short walk to try to get to the edge of Pleasant Pond but it just got too wet. 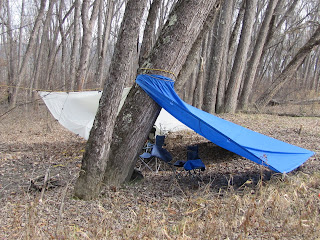 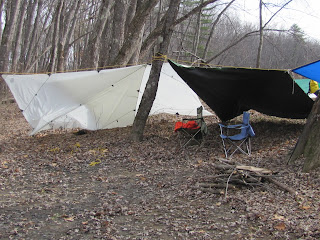 Later we got another big ass fire going and just hung out enjoying being out on this river.  It's why we end up doing this, just to relaxing in the end.

Sunday saw us off the river fairly early as we all seemed to have something waiting for us at home.  So, another trip, short in mileages but long in good times.  Good fires, good food, good friends!