A while back I read on-line about this stuff called KeelEazy and it sure sounded interesting to me.  I got on their site and read most of what they had there and now my curiosity was way up!  This stuff sounded like a real sure fire way to treat at least one of my boats at a lower cost in materials and huge savings in time compared to doing the resin and cloth system.

I took them up on the offer for a free sample and sure enough in a few days it showed up on my doorstep.  It was a 2 x 12 sample and I decided to use it on the Eclipse as there was some wear marks from use.

I looked over the website for directions quickly and went to the workshop and got the patch ready.
I cut it in half as that would be enough for both ends and then started to peel it apart.  Man I thought, this stuff is a bitch to get off!!
I tugged and pulled and finally got it separated and put the black part aside thinking I could use it for something.  I laid it on the hull with the blue side up and took my hairdryer to it and smoothed it out.  Now that was slick, every wrinkle come out, all the puckers smoothed out nicely and it was sticking like they said it would!  Look Ma, no runs of resin, no taping, no cutting of cloth with lots of strands sticking out!  And best of all NO GLOVES!  I could fall in love was what I was thinking! 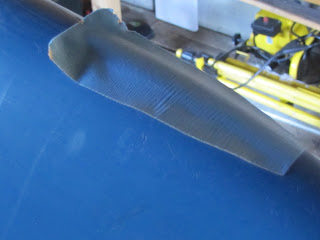 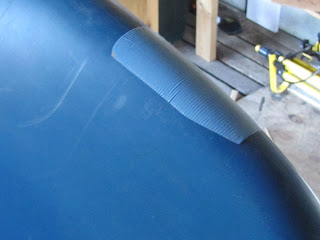 I then peeled off the blue protective covering to see a whiteish patch and man was it sticky to the touch!  Little bells started ringing in my gray matter and I knew something was wrong. 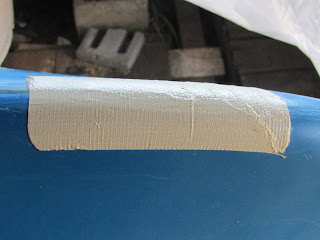 I made a quick beeline to the computer and did a search on KeelEazy and found a YouTube tutorial on how to apply it.

I hurried back down and took those nice black thick pieces I had set aside and quickly laid them on top of the adhesive and dropped them on and took the hairdryer to them.  Yup, I had peeled off the wrong pieces and done it all ass backwards!  What a dumbass I am sometimes, please don't take the time to refine this point to me next time you meet up with me!

I spent a few extra minutes heating and smoothing it out and hoped for the best.   According to the website I could peel it off easily enough if I needed to.  In the morning I went out and checked both patches.  I'll be damned but both rock solid!  I tried to get my fingernail under the edge and it was tough to do so.  I need to take it out and run it into the sand a few times to make a full determination of how it preforms but it feels like the Dynel patches I put on the Courier and am anguished to see how it does. 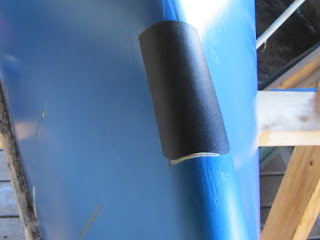