My First Malecite, A Quick Rehab

With the Kevlar Malecite on hold for right now I started on the first fiberglass Malecite I bought back in 2003 I believe it was.  If I recall the HIN reads her as a 92.  She sure was a work of art and was only the second canoe I had ever worked on.  To date I have replaced the gunwales twice, negligence on my part, with the second set having the outter wales about and inch and a half to short.  Wasn't that a bitch but I knew it going in and just dealt with it.  I used luan as decks but hated them from the get go.  I really wanted long decks on it and that seemed to be the way to go.  Now it's time for fixes.

First off I started building new decks out of ash.  Again I wanted long decks but settled for 18" long which is long enough to make it eye candy for me.  I am in the process of putting three pieces together to get my width of 15.5" so I will have enough room for cutting it to the shape I want. The only way I can do this is to drill holes in all three pieces, place dowels in cut to size and then G-Flex them together, it's what I did on the Eclipse!

Now, that is easier said then done for I don't have a jig to hold them vertical on the drill press so have to do it by eye.  Needless to say they come out close but not perfect but that is what a planer is for, to knock of the high spots.  Basically I measured out where I wanted the dowels and made my lines transferring them on the high side and the flat side.  From there I split the vertical down the middle and drilled my holes there.  Damn but a jig would have been nice but by hand it was quicker and they weren't off by all that much.  A can of liquid courage got me through it and I didn't hyperventilate as much as I have in the past.  It's amazing how a little bit, ok A LOT of trial and error makes you relax more with every job!

Unlike the decks bought from MR these will be flat and won't have any type of upward curve to them at the height and middle.  Hell, a deck is a deck and don't do a whole lot besides hide what is under them.

After drilling the holes on the first deck I decided I need to find a joiner to get the edges flush.  This was after a few dry fits as I had to dick around with the dowels and how long they were.  Of course I don't have one but working for a school system they do and they are always willing to help me out with this kind of stuff, good guys!  Tomorrow I'll ask if they can shave a sliver off and call it good.

I will admit that I planed these pieces first and instead of joining them first and then planing them.  It's much easier to place the dowels when the wood is thicker but then again this is me working on boats and I'm not always on top of the game.  I should read my own blog and notes before I get going on these projects before I start.  Hmmm, maybe next time!

Ok, so I mentioned that the gunwales came out to short cause I didn't have the right length.  Since it is at the bow and stern I'm going to scab\scarf in with the additional pieces I need.  Of course I think this will be easy and a no brainer but I am actually smart enough to know this will be a bear and cause me all sorts of problems and will require many cans of liquid courage and possibly some tears to see me through it all.  I honestly believe I am out of new swear words so I'll have to resort to the same old vocabulary and hope I can get something new in there because my plan is to only release the ends enough to get the angles I need with the new and old wood and then apply some resin/g-flex mix as a bond.  Yeah, pretty dumb idea but I sure as hell ain't taking the whole damn gunwale system off for an inch and a half.  Almost sounds like a really bad joke, eh?

I spent the morning setting up the second gunwale with the dowels and G-Flex.  I found that I needed to weight them down to keep the boards flush as they wanted to bend in a U with the pressure of the clamps.

In the meantime I needed to do something about the gunwales as I was about 3.5" to short.  Still kick myself in the ass for that mistake.  I had some old gunwales sitting around so I cut off some pieces to scab in and started cutting them to the shape they needed to be in, it was a bear as I promised earlier in this article.

I took off the old deck, just one side at a time and could see I needed to add some type of "filler" to drill the new pieces into.  I used a hunk of ash and spent a fair amount of time shaping it with a few different tools to make it fit.  It came out looking like this: 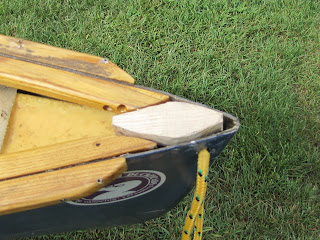 Now the one nice thing was I was able to see how Mad River did the tanks so when I start my Kevlar Malecite I will have a reference to rebuild off of.  That might have been the best part of the day!  Next I cut off the old gunwales and started that whole process and ended up with this turd of a mess but it is rock solid and will work. 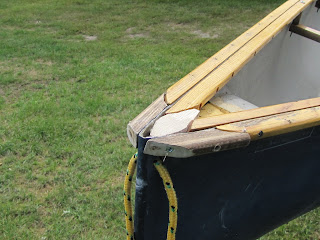 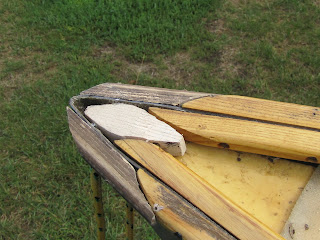 I can honestly say that I am very unhappy with the results but it will have to do for now.  A quick fix usually brings its own set of problems for down the road and I do see a new set of gunwales that actually fit in the future!

Time to work on the deck.  Starting out with the blank I had built.

I traced it off the canoe and then did a bunch of measurements before cutting.  I was pretty proud of my cutting skills with a cheap assed Craftsman's 14 year old saber saw but will still need to do some sanding.  Now I thought 18" long would be just enough but boy was I off.  I just happen to like the looks of longer decks and had convinced myself this would be enough.  As soon as I put it up for a dry fit I knew it wasn't going to work for me.

I'm proud of myself for not throwing a tantrum, or tools or even swearing!  Might be a first in the rebuilding of canoes I've gotten myself into.  I humbly put everything away, found a can of liquid courage and fired up the riding mower.  Spent the next hour or so taking care of the lawn as it was thick enough to take it slow and turned it into three cans of liquid courage to finish.  The kicker was when I got in the house and took off my hat I found an extra skull!  How the hell this poor frogs head turned up on my noggin is beyond me. 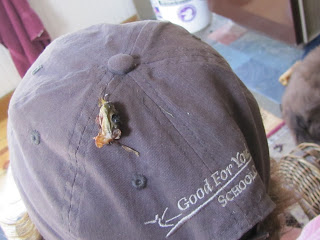 I guess I am going to go with the new decks for now, for the Umbagog trip, but I sure won't be happy about it.  I see new gunwales that fit and new decks come the spring.  I also need to add some skid plates and some reinforcement on the V of the hull.  So for now they will live on this old hull but will probably find a new home on the Colander.

I put the second deck on tonight and called it a done deal.  I recall someone posting on a message board that short cuts lead to costly rebuilds or something like that.  In my eyes this is one of those cases.  I need these for the upcoming trip to Lake Umbagog but they will get stripped off as well as the gunwales and a total refit is the future.  Guess it will be the new spring rebuild!  For now I'll just try to look elsewhere besides those nasty assed looking things.  Going out for a can of liquid courage and a session of kicking myself in the ass to smarten up for the next time around!