Damn It!  Why do I keep doing this?  Another hull to fix!  This time a kayak, I almost feel like it's sacrilege to have it in my shop!  But ya know when it's free and almost new then I guess it's ok.

To make it a short story it was listed on Craigslist after it had blown off the owners car and did some real bad ass damage on the end of the stems.  After looking it over and seeing how easy it was to access the inside of the hull I now have a plan as how to go about fixing this.

This is a Hurricane Kayak which is a Thermomold design.  Very light and looks very well built.

First off here are some pictures of the damage: 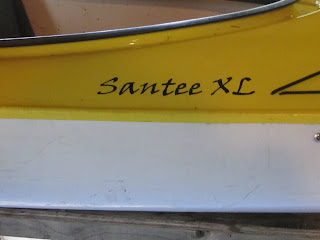 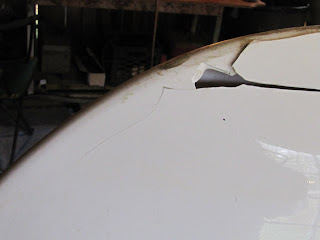 My first gut reaction is to attack the damage from the inside since it is so easy to get to.  While dubbing with all the pieces it was apparent that I could fairly easily push them all back into place and then fill the holes after I have that part done.  This is going to be an interesting project!

I needed to "pinch" the front end together and after struggling to get all the broken/cracked pieces lined up I decided to use tape to hold it together.  In the past I used duct and masking tape but had to deal with the residue of it being on for a long period of time.  This time I used electrical tape which had a lot of stretch to it and held tight at the same time.

I cleaned out the bulkhead and mixed up G-Flex and cut Dynel patches about 5" long by 2" wide and saturated them.  The hatch is small so I could only fit one arm in to lay the patch which is why I decided to overlap the patches by using short pieces as I don't think I could get a full length pieces in.  I did this part by feel, take a look, reach in again to readjust and then look again, reach in...you get the idea.  I got it the best I could and called it good.  This is a bulkhead in a rec yak so I'm not concerned about cosmetics and besides knowing who is buying this off means that it will be some ice and beers!

I overlapped two patches and called it quits as I have a vertical crack and hole to plan for.  Gotta love a plan and I do have one, just hope it is the right one!

It turned out to be a beautiful warm day so I took advantage of the warmth to add more patches on the inside of the bow.  I added two more pieces of dynel and then switched over to S-Glass for the higher up cracks.  Again it was a tedious task of looking in to visually find the crack, reach in and try to place the saturated cloth, look again and readjust again and again.  I can tell you this, it ain't pretty but it will be structurally sound!

I have my doubts about being able to do this on the vertical crack but am going to attempt it on another day.  On the hole I laid a patch of wax paper backed by masking tape and reinforced it with a piece of cardboard and more tape.  When the interior patch has cured I will fill the hole with resin/G-Flex mix and then lay S-Glass on top of that.  In fact I will be doing the same for all the cracks.  In all I spent about two hours laying out five patches total.

I moved the kayak into the house as I wanted a warm work environment to get the stern done on the inside.  It was pretty much the same steps but this time I used a sharpie to add dots on the cloths edge so I had a visual when I adjusted it.  Again I overlapped the cloth and worked it up into the hull, not a lot of fun!  After that had cured for a few hours I laid in one more covering piece and called it good.  The next step is to finish off the outside and take it for a test ride to check for leaks. 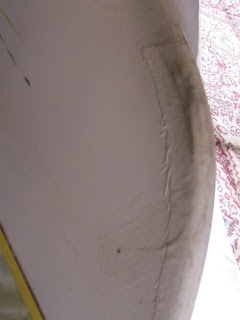 Well, the patches were set and it was time for a test drive.  This Thanksgiving Day was beautiful, warm, windless and sunny.  I decided to do the test on the confluence of the Contoocook and Merrimack Rivers.  Now I'm not much of a kayaker so this had my nerves on edge, I really didn't want to dump but I needed to see if the patches were as solid as I thought.

At the Contoocook I finally pushed from shore and tenderly paddles out about ten feet from shore and did some spinning around to try to get a feel of the hull.  Being a rec boat and fairly wide I found it to be pretty damn stable.  I got the gumption up to cross the mouth of the river and then go upstream for a bit.  I was bracing my knees hard and then thought about the foot braces!  Duh!  What difference they made and I got a whole lot more comfortable in a short time.  I then ventured out onto the Merrimack and in time was up at my buddies house but they were gone.  He missed the sight of me in a kayak!  In between all the paddling I kept pulling over and checking the hatches, not one drip of water.  My patches were rock solid and I had a smug grin on my face!  Another hull fixed!

Back home I looked the patches over one last time as I knew the hull was leaving the next day.  By now it was warming up nicely and the lack of wind told me I needed to go out again.  I put in on a section of the Tookie not far from the house and paddle upstream about a mile or so.  It was one of those stunning afternoons, water so calm the reflections off it made for a background that one can't find elsewhere! 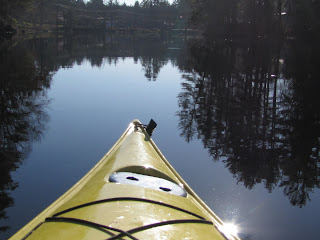 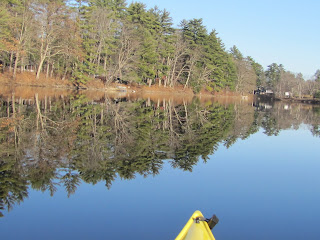 So it was a successful test run.  I almost had too much fun in that kayak.  Not sure if I really would want one but it is nice to paddle almost effortlessly compared to my ol' canoe hulls.  Sweet ride but am happy it is going to someone else's home!  All in all a good project!