Since my youth I have been a canoeist.  Yes, I may have dabbled with those kayaks most folks have.  There is the story of buying a Klepper with its bow filled with ice, bought in January and hoisted it up three stories to my apartment to thaw it out, the generic kayak in the 80's that sat so high I kept flipping the goddamn thing!  I spent more time emptying that bugger out then I did paddling it. I kept washing my hands of anything kayak and bought more canoes than I could keep up with.  Then an something happened.  I had a chance to fix a free kayak from Craigslist.  I didn't know what to expect but hell it was free!

It turned out to be a Hurricane Santee 116, a short stubby little thing but it was not a plastic hull and so well made I was actually impressed!  My fixes turned out rock solid and after taking it for a test ride twice in a day I was a bit hooked!  I sold it to my buddy who needed a kayak with a bigger cockpit than the ones his wife and daughters have.

So began the search!  I looked and looked and looked.  I got in touch with friends with some hulls I was looking at but this one was too big for me, that one was to expensive, the other was too short.  I was getting really frustrated!  In one final attempt I searched once again on line and found someone who had a Hurricane Tampico 140S which seemed to be the hull I was looking for.  Built for a smaller and lighter person, that'd be me, good tracker and lightweight but rugged.  All the reviews I read were positive.  So in the end I finally got a kayak. 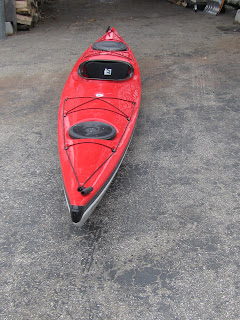 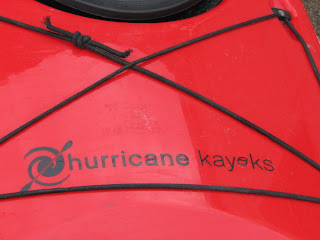 My buddy Scott joined me for my maiden paddle on the Mack.  I was hesitant as I am not used to such a thin boat!  My first mistake was wearing my muck boots!  Too big!  I had a hard time getting them in and down to the foot pegs.  I later found a pair of booties that will fit just fine.  It was great to paddle with such ease into a headwind!  I had a grin on my face the entire day! 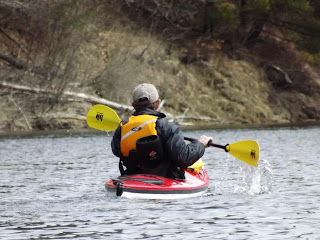 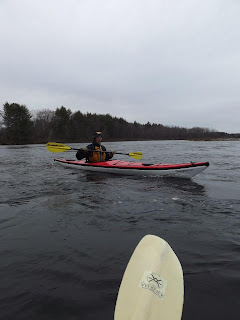 It is just a matter of spending time in this boat to get comfortable!  I think I'm going to enjoy this!
Posted by Scooter at 2:39 AM