The local store owner approached me with a little bit of a challenge.  Can I fix his aluminum canoe?  Well, I say I'll give it try and why the hell not?  I worked on my mother's aluminum canoe a few years back but it wasn't holed.  This one was, not bad but enough to make it a pain.

Once I got it here I put it on sawhorses and slowly filled it with water one bucket at a time.  The leaks were due to small pin holes in a patch on the hull and the end of the stern where it had seen a lot of use. There is also a patch from a previous breach in the hull and water was leaking out of there at well. 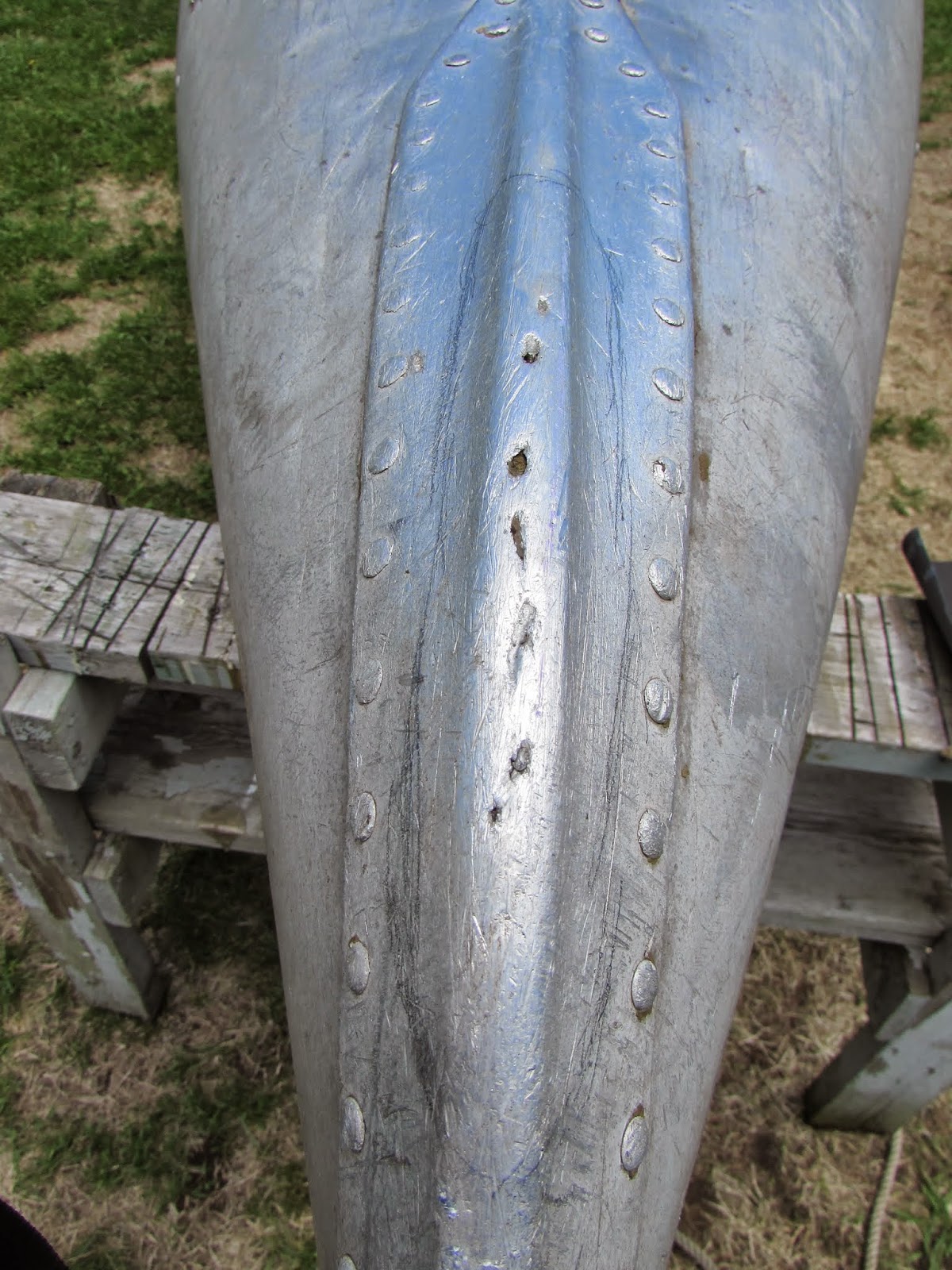 Since the holes where so small I thought I'd try out some G-Flex in them.  I had just bought some syringes for this type of work.  I filled each hole with just enough resin so they weren't overflowing.  I then put a layer of Dynel cloth over that to make a tight seal.  I used this link for a guideline:

It's all pretty simple but as usual prep time is what eats up most of the job.  Here's what I used. 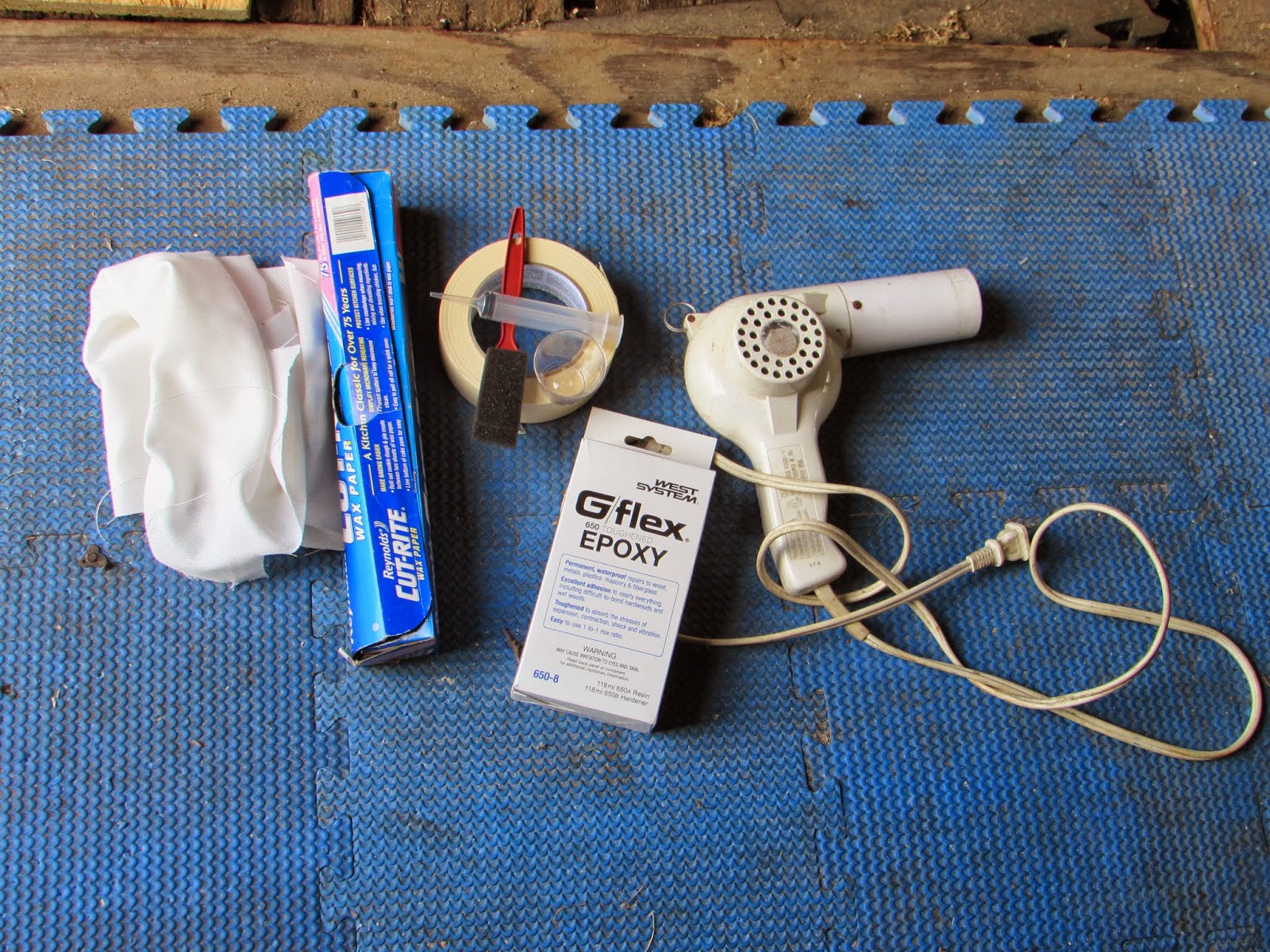 I filled the boat the next day with water and waited for two hours while keeping checking for any leaks.  None so it was a success.  Next on the board was to find a way to fix the decks.  The aluminum had ripped and all one has to do to open an artery is to scrap against it. 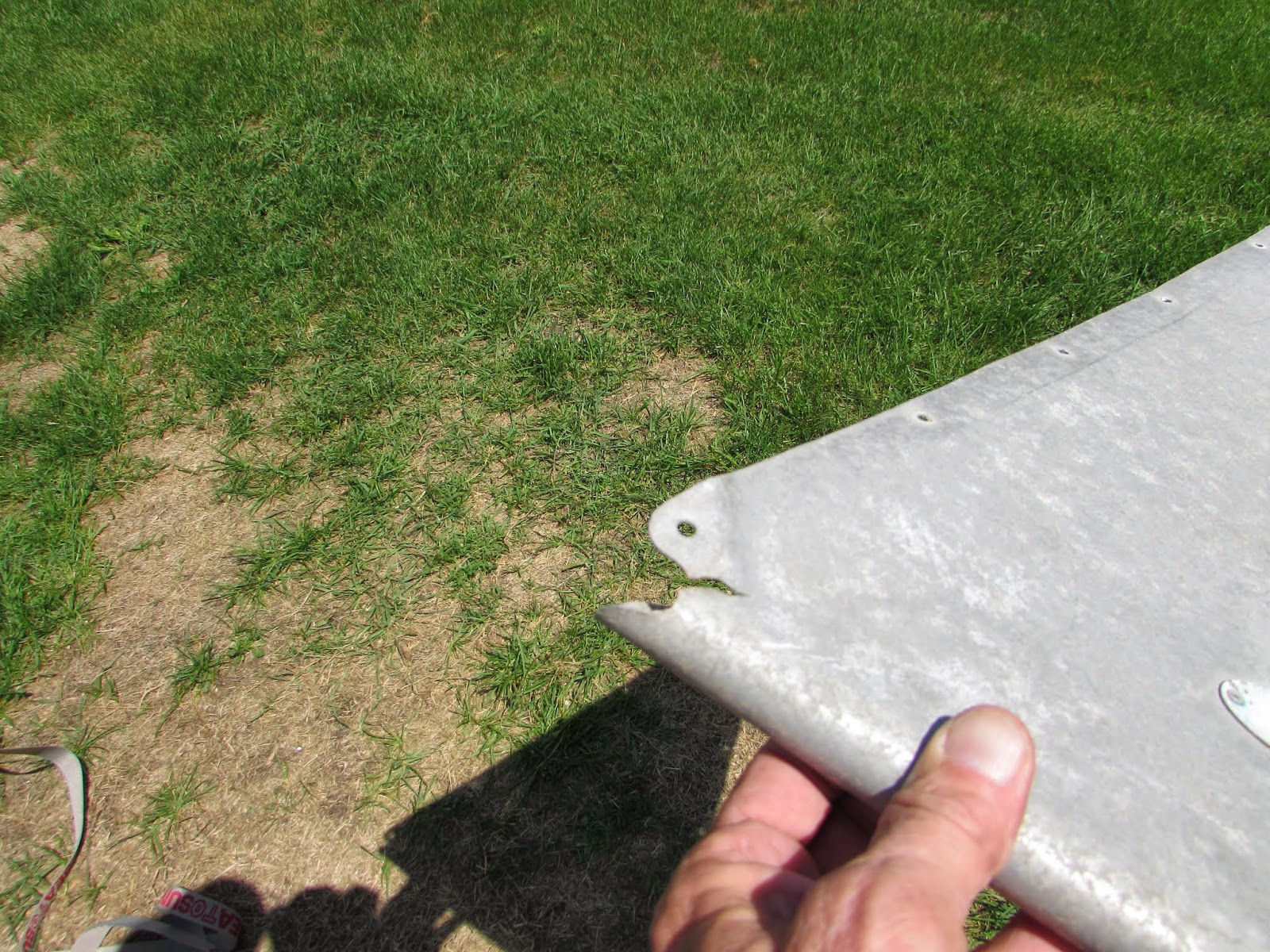 I tried to bend the cut back but didn't have a way to seal the cut.  I talked with the owner and said I could probably replace the decks with wood and he was good with that.  I had some luan set aside for just this kind of project and decided to use that.  I drilled out the rivets on the metal decks and used them as a template to cut out the new decks. Four coats of spar varnish and I deemed it good to go. 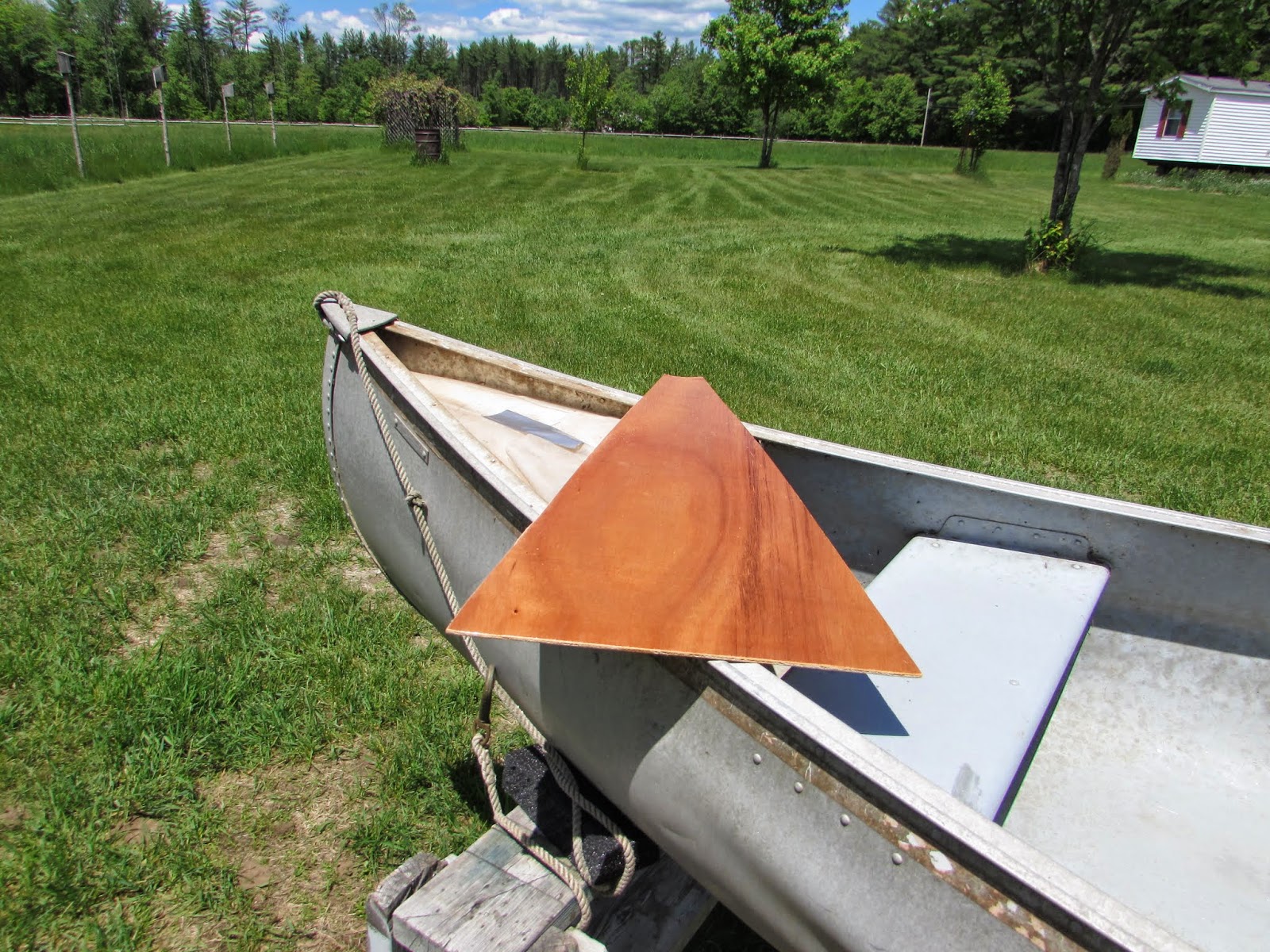 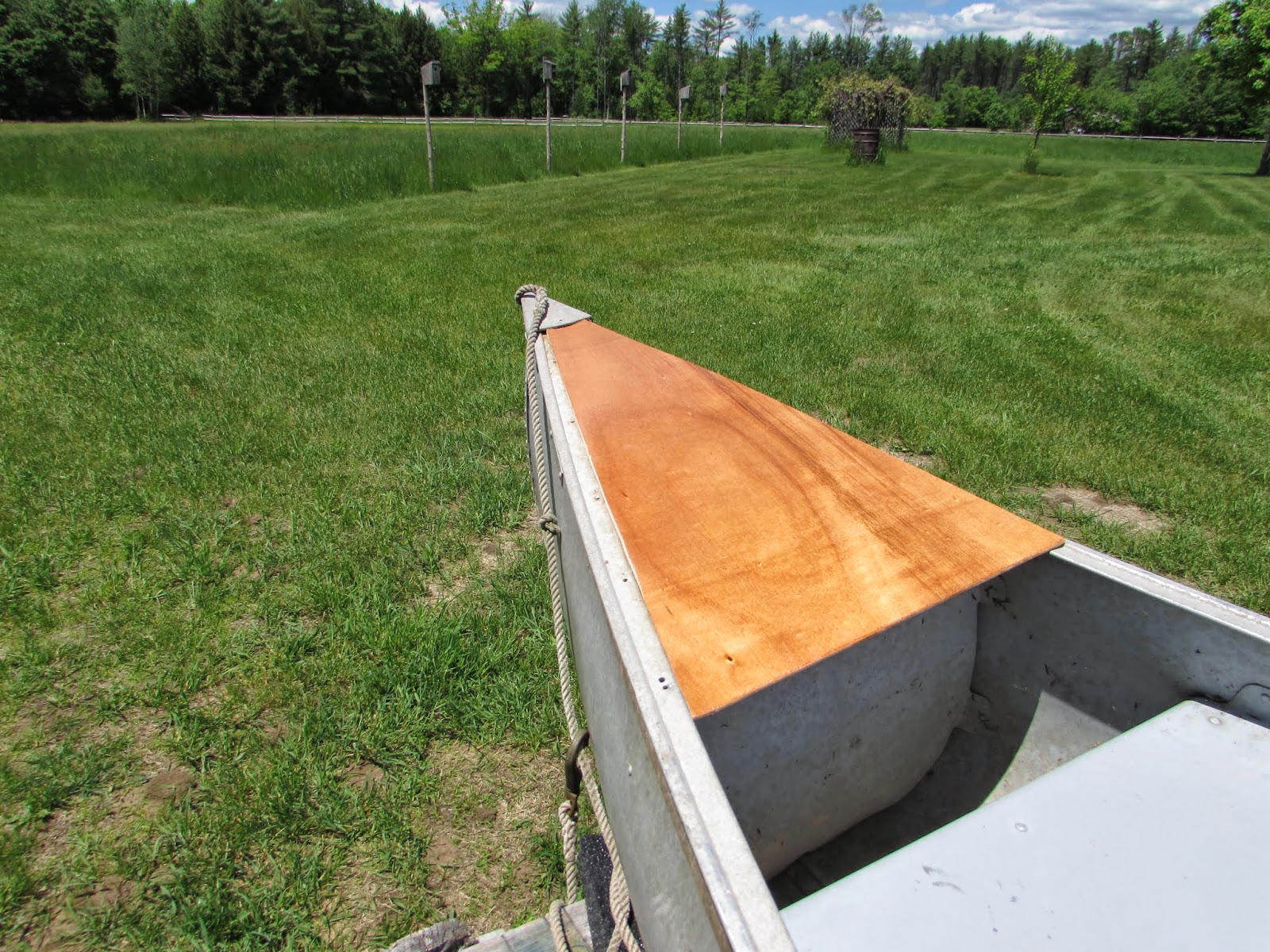 I used rivets with a washer as a backing to hold them in place but fires smeared a healthy dose of G-Flex to the metal and the wood as an additional holding agent.  I am going to be adding a piece of ash to the wide end of the deck which will tie into the hull for a carry handle and add support.

Since I was working with resin I decided to add a little weight to make sure of a good bond.  Bricks! 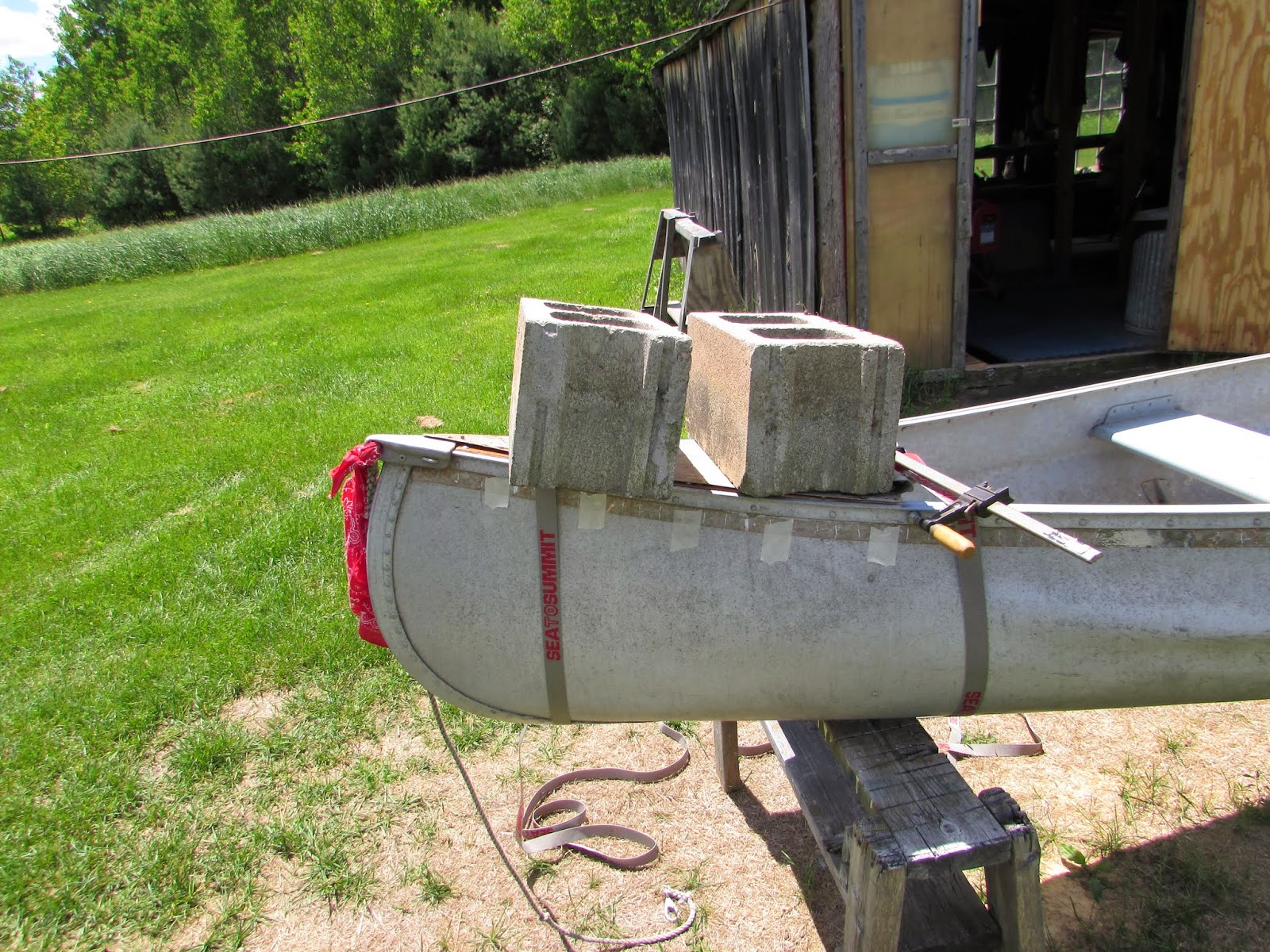 Now one thing I didn't realize until I had already done it was that once the metal decks were off the hull spread some and the wood deck wasn't fitting correctly.  I used my straps to cinch it in so it was a tight fit.  Once I did that I drilled through the wood deck and into the the lip of the hull so the rivets would line up.  I made sure I marked with tape where the old rivet holes were so I could off set the new holes. 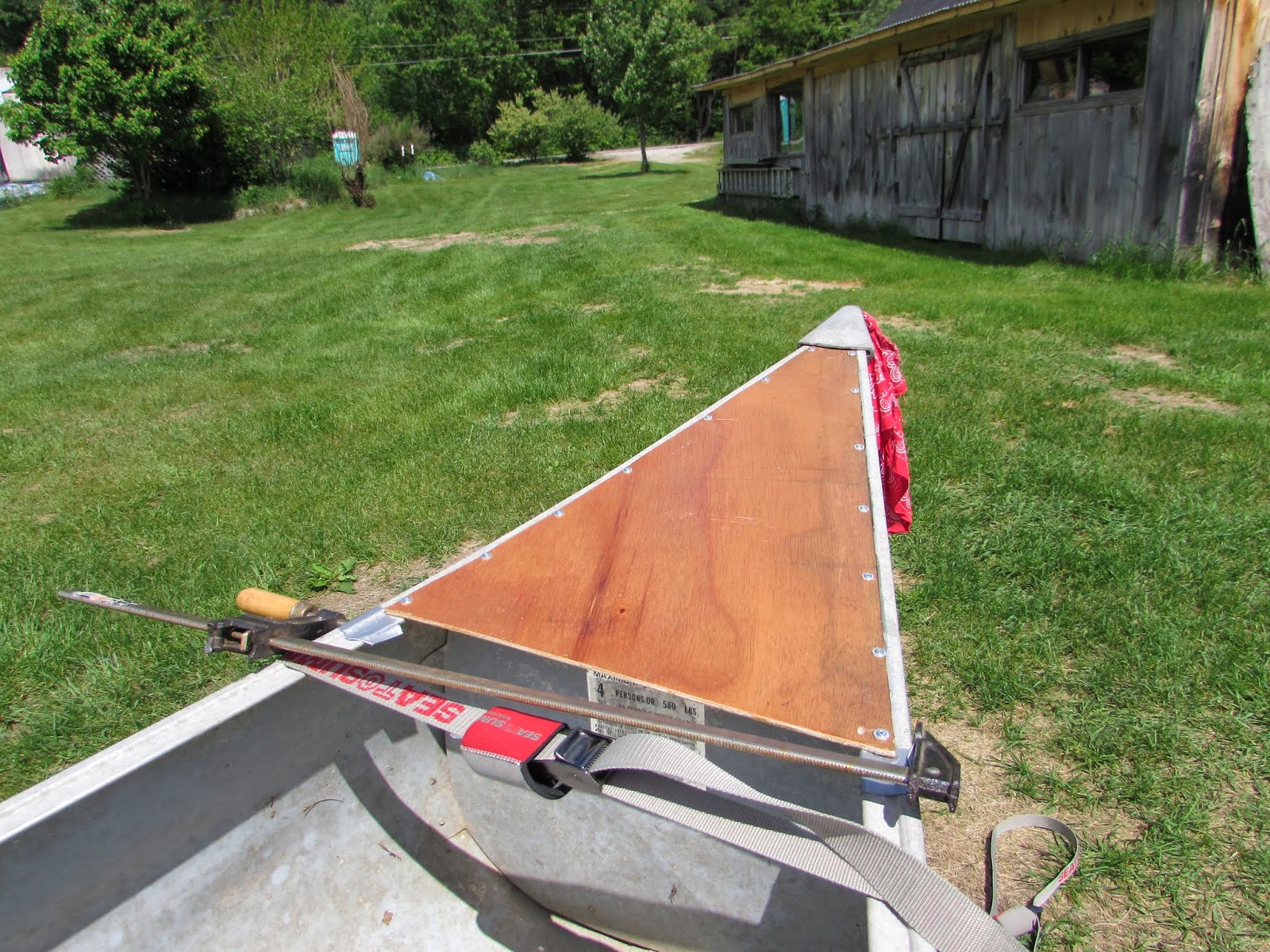 All in all not bad.  I did add a layer of foam to the existing foam bulkhead so the wooden deck has more support.  All I can think is if someone sits on it.
A few pictures of the boat. 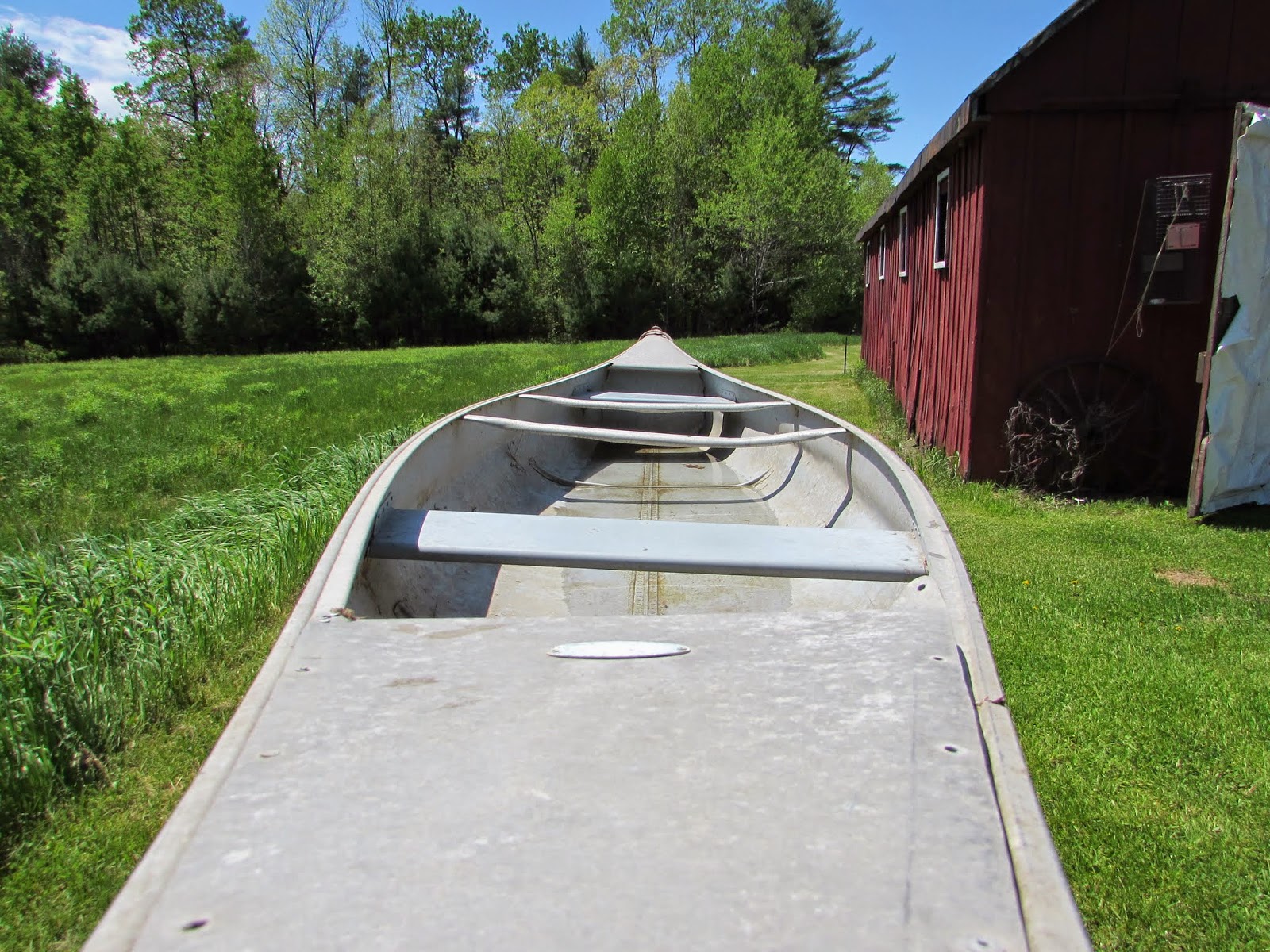 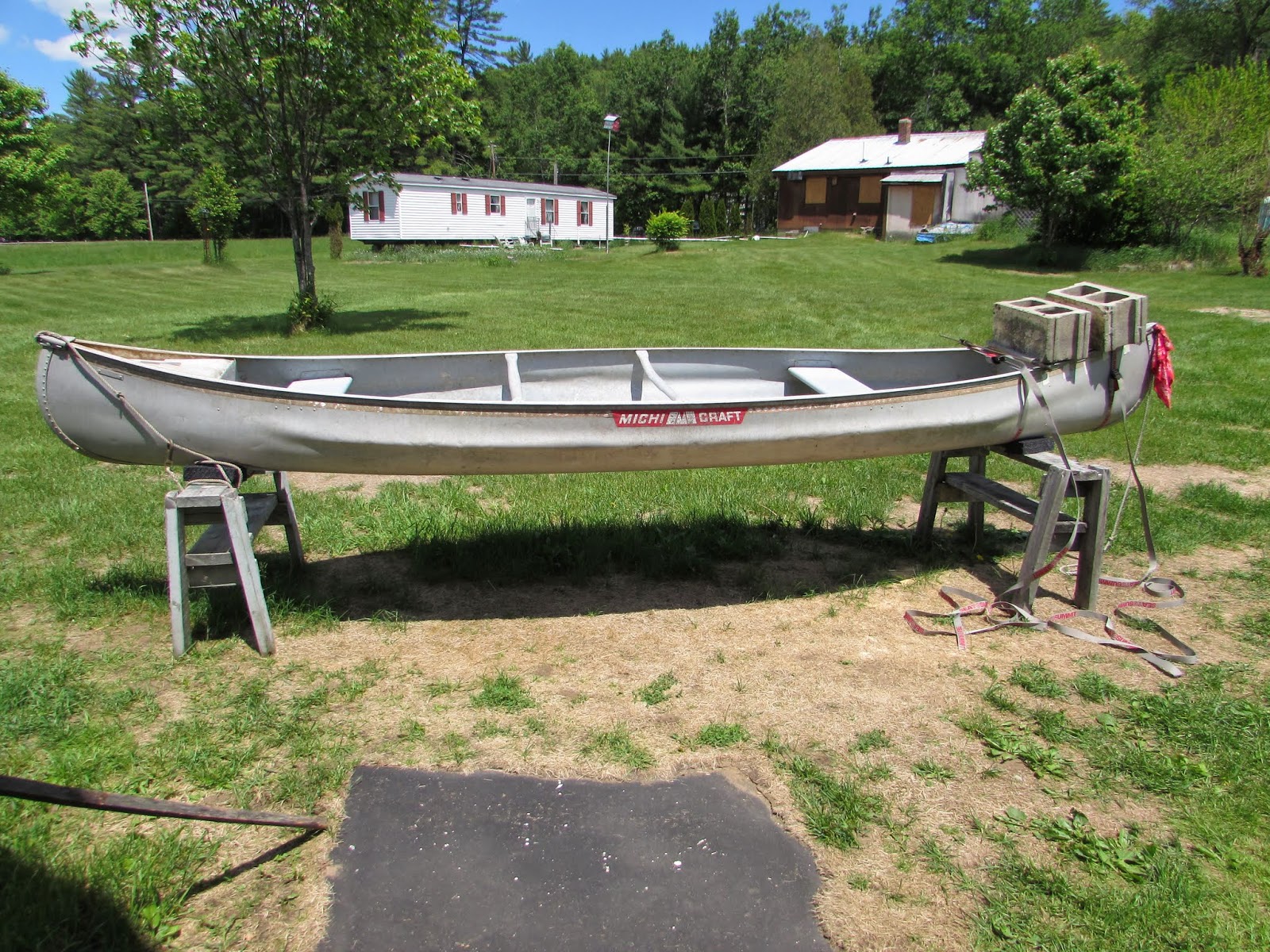 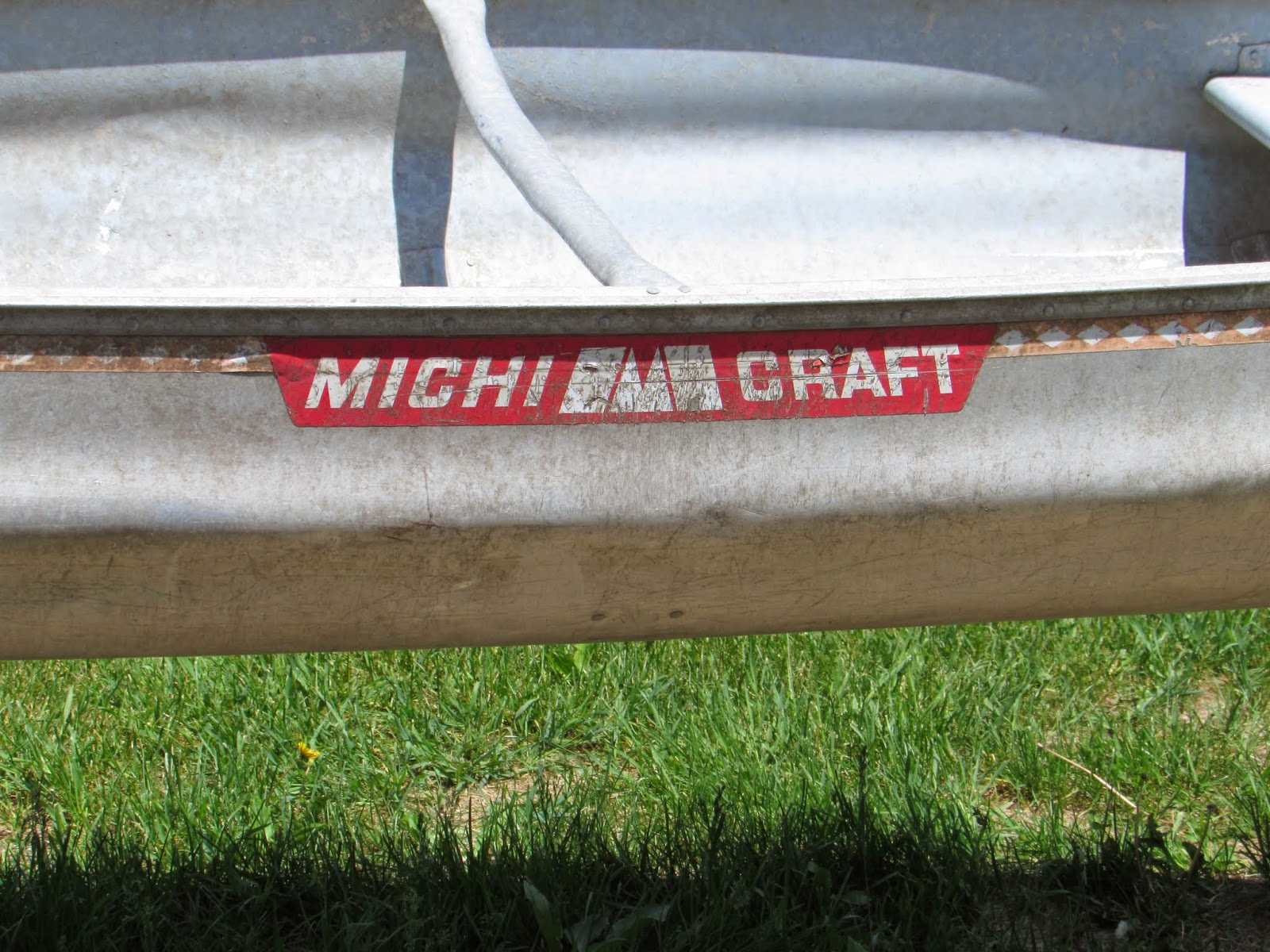