I have been dubbing around for years now on making a rudder for my canoes.  My only successful one was and is for the Hogged Backed Saint, the Disco 158.  It has the perfect decks and no tanks to deal with to make this all work.

Now I have made several rudders out of wood but they all want to float to the surface of the water without some kind of line holding them into place.  I asked the Maintenance guys at work if they had any old signs that were destined for the metal pile.  In one day they had a nice aluminum stop sign for me.  Hell, I can get two rudders out of this sucker!

I have a Feathercraft rudder mount that I have rigged up to mount on my Disco so it was just a matter of milling out some wood and cutting the sign up to the dimensions I need. I used one of the existing rudders I had, way to long, as a template, to cut out the new one.  The sign is only thirty inches so that will have to do but if it isn't long enough I do have a way of extending it to get the length I need.  That will come later.

Using my skill saw and a new metal blade I cut out the new rudder.  It certainly is nice to have a good jigsaw with some power and power cord that isn't broken!  Cutting it out was quick and smooth!

Now, I am not a fan of working with metal, way to many slices on the fingers/palm in the past.  I think that is worse then a freaking paper cut!  I used my standard mincell and leftover belt sander belts to smooth over the edges of the cuts.  I used a forty grit which worked just about perfect!

The main ingredient in this mix is the Feathercraft mount which I will refer to as the Thang for the rest of this write up.  I spent a lot of time and effort figuring how to attach this to my Disco a few years back and it does work nicely.  Jury rigged of course!  In this case I want to attach a tiller although I do have the Disco rigged for foot steerage if I care to go that route, I just figure the tiller is a much easier way to go and I already made one out of an aluminum rod.  In order to attach the tiller to the Feathercraft I needed to make an attachment of sorts, basically a piece of pine with holes drilled through it to bolt to the Feathercraft and the tiller. 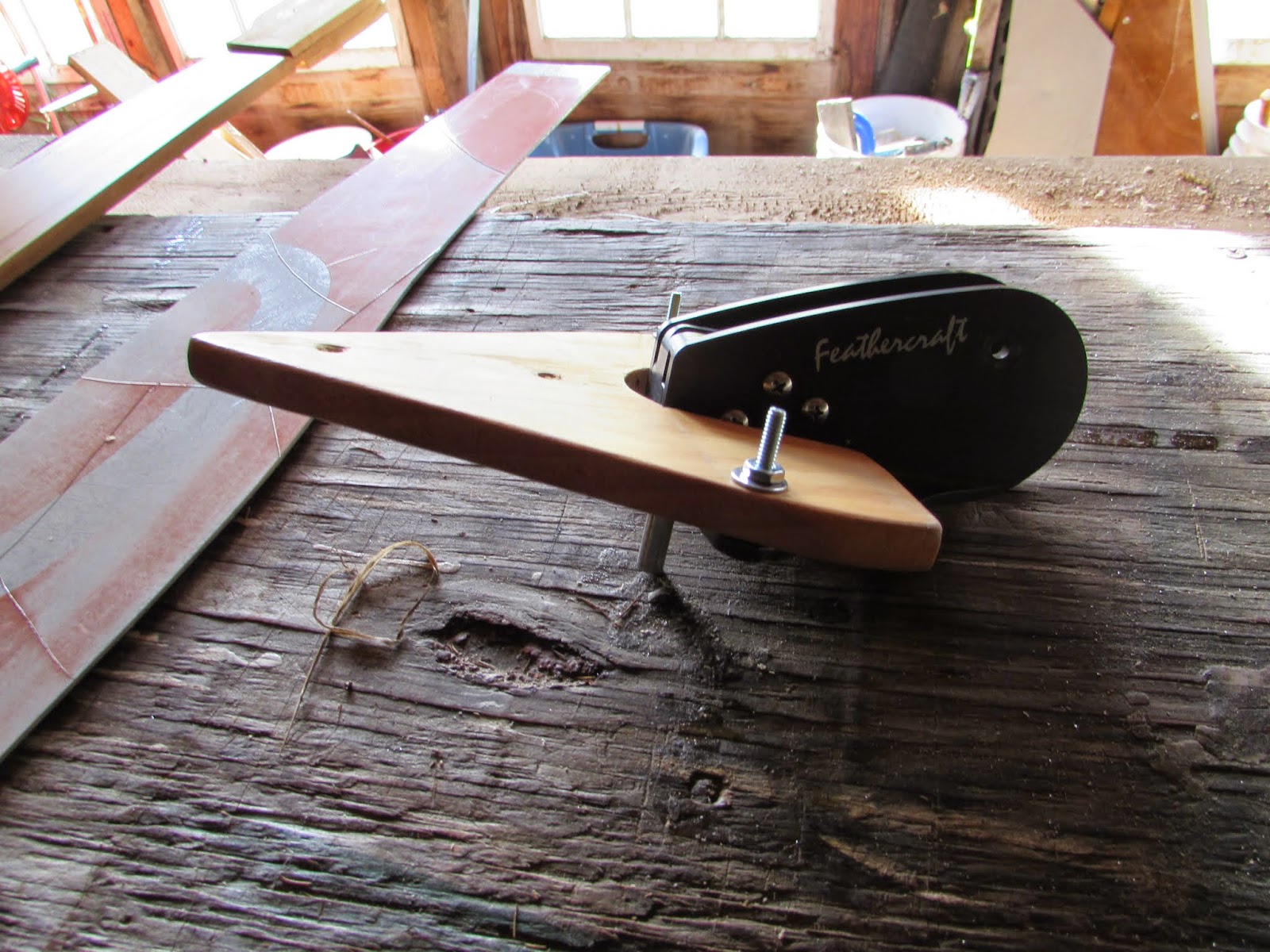 Since the metal was to thin to mount in the Thang I needed to modify some wood pieces.  Using some left over ash I cut them to the shape I needed and then planned them down to the thickness I needed to fit.

The ash has that shape to fit where the hull sticks out.  It is a tight fit and a later picture should explain it.  For now though I put them in my vice and sanded them with my belt sander to get a uniform edge.  Next I decided to adhere them to the metal I would use G-Flex and will later drill through and add some bolts and nuts, it is too wide to use rivets.  I figured this would be the easy part but NOOOOOOO.  I applied the G-Flex laying it on fairly thick but when it came time for clamping the wood pieces in place and trying to match them up it was slippery then snot on a cold day and the two pieces kept moving around like fish on ice!  I was getting pretty pissed off and words that the neighbors didn't want to hear went flying through the air!  Damn, it really shouldn't be this hard!

In hindsight I should have done one side at a time but I am quite frequently not one to take those long steps.  Knowing how long I can work with this resin I took a breath and visited a can of liquid courage and jockeyed them so they were even with each other.  I took a piece of thick paper and folded it over several times to fill the gap between the pieces of wood on the upper reach.  I will have to fill that later with something!

I am going to let this sit for a day or two and then I will have to fill that gap, drill for the bolt and nut that holds it into the Thang and then do some painting and spar on the wood.

This morning I knocked the wood on the rudder around some and I'm confident that the G-Flex setup is secure.  I do want to put a couple of bolts through to really secure the wood to the metal but that can come down the road.  That is a high stress point and will need, IMO, some reinforcement.  In the meantime I did a dry fit on the hull with the whole assembly and it came out just about perfect.  I may have to sand a couple of hairs off but that will take a second.

Just so you can get a visual on this setup I'm including these next set of pictures.  A very easy setup and breakdown and should all store in a bag when not in use.  The tiller will just be laid on the floor of the canoe when not in use like the leeboard. 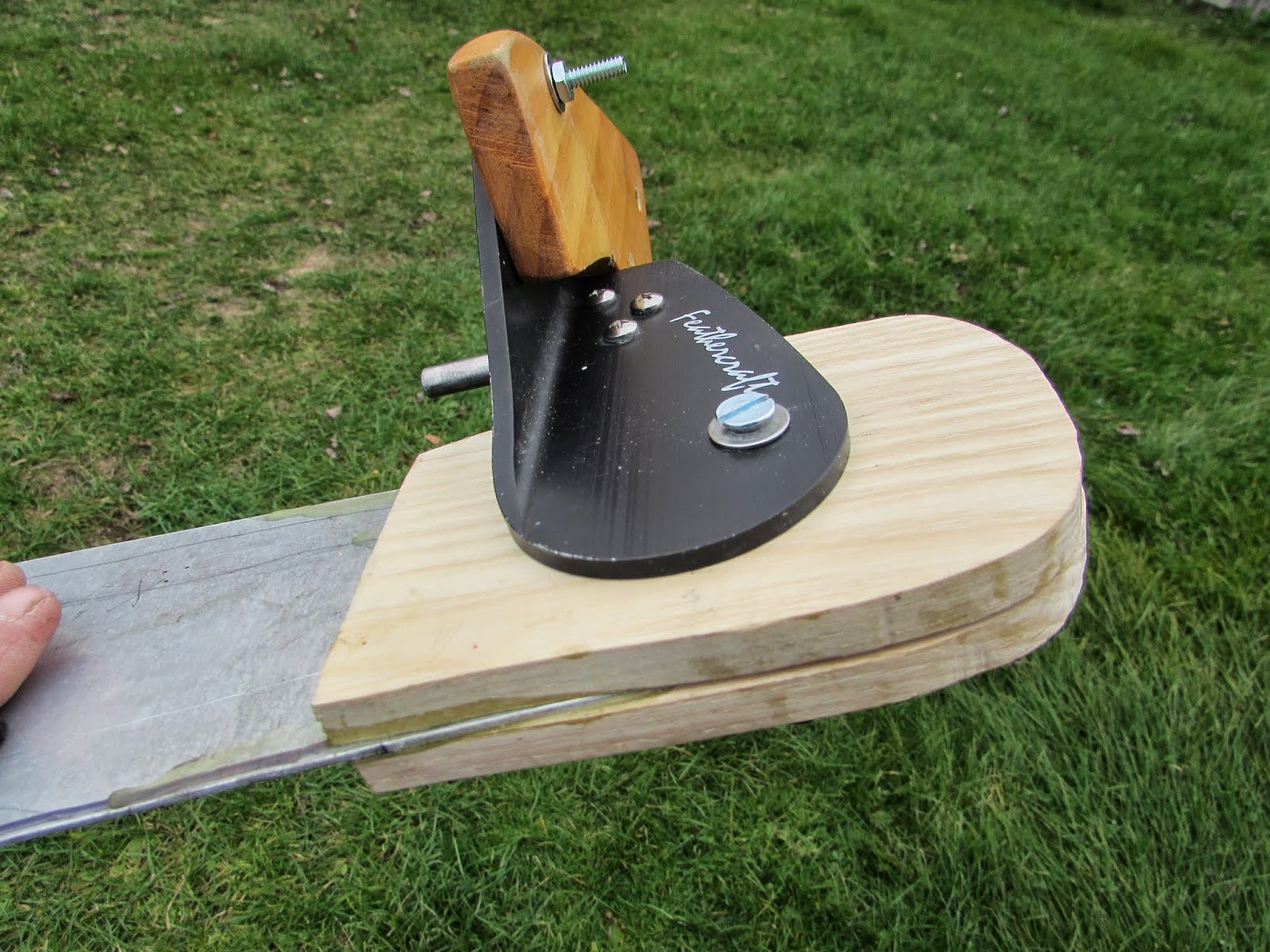 I decided to paint it yellow with black strips.  I masked off the strips on both side of the rudder with masking tape and then cut several strips the width of the masking tape out of some left over metal.  I am going to rivet and G-Flex these on at diagonals to add a little bit of strength as I think this metal is just a tad to thin and will vibrate like hell.  I had one leeboard that did that and it drove me nuts when I was hauling ass down a lake.

I am literally watching paint dry so I can move on to the next step of adding my black paint and the metal strips.  I will be drilling through the rudder to add one last thing, a rope or a bungee cord to pull it out of the water as I come to shore.  I do have a plan for that as well.  Very simple, KISS is the theme on these canoe modifications!

Waiting for paint to dry is a nasty job.  Twiddling thumbs is not a virtue of mine.  I spent a lot of time masking off tape for the design I thought I wanted and then did the black paint.  I just wasn't sure!


I hung it to dry for the night and the next day I flipped it over and did the other side.  Of course on both sides the paint bleed through some but if I even care to fix it is easy to do, hell, it's a damned rudder and it is going to get used hard so the paint will wear off.  Hmm, how hard would it be to build a carbon fiber one?  So when the paint job was done and still drying I'm wondering about the colors.

Now here is one thing I learned from this project because I don't usually paint, I'm going to go with enamel paint next time.  I had to bring this in after painting and put it next to a heater to fully dry and it is not all that tough.

Not real happy with what I did with the colors and may change it but it sure sticks out like a sore thumb!  Kinda what I had in mind but if I keep it at least it will be behind me where I can't see the sucker!  I may do so other stuff to it, going to mull this one over for a bit and consult a can of liquid courage!