Once again I swore I was never going to look at Craigs List again but one late afternoon I caved in and started a search for the hell of it on canoes.  In Vermont I found a fresh post about a Mad River Malecite in Kevlar with new gunwales, decks and three contour seats for chump change!  Holy Crap!  I email and within twenty minutes I get a call and the deal is made.  The biggest problem is the owner cut one gunwale too short and I think he just lost courage and walked off the job.

So when I finally got it one set of gunwales had been placed in as well as one deck but no thwarts or seats.  The second set of gunwales and seats where part of the purchase, already rounded over and nice done, not my crappy way of doing them.  If I have to scarf in a piece I will.  It is really a bonus to have the decks included but I now have to learn how to install them as they are inlaid and may ask the help of my ol' buddy Hal the Gullboy!

Now in order to get this bowl of jello home I needed to put in a temporary thwart which I screwed in from one side and then used rope and a strap to cinch it tight with the help of some duct tape. 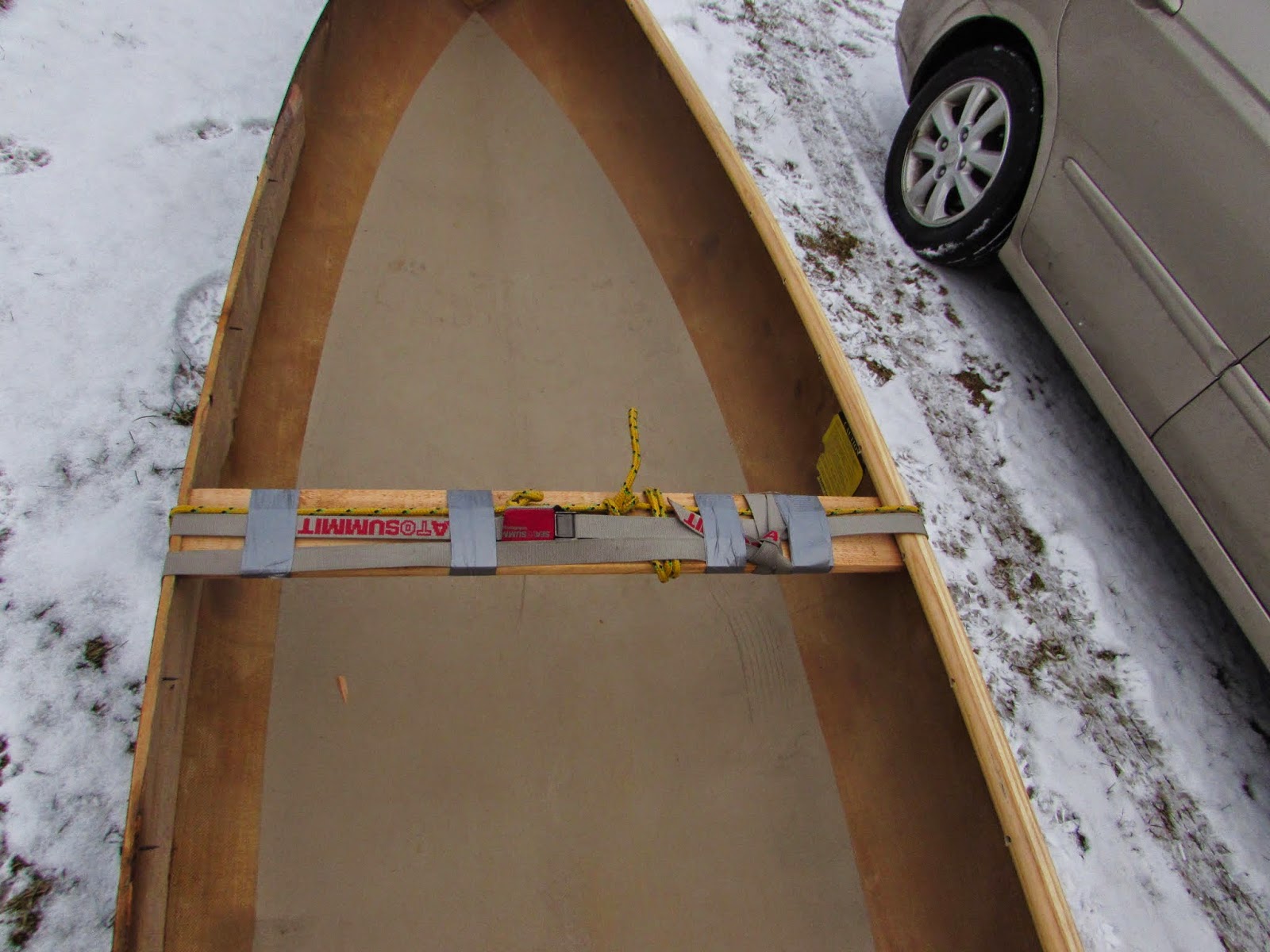 Not pretty but it worked.  I ended up using seven sections of rope and two straps to get it  home. 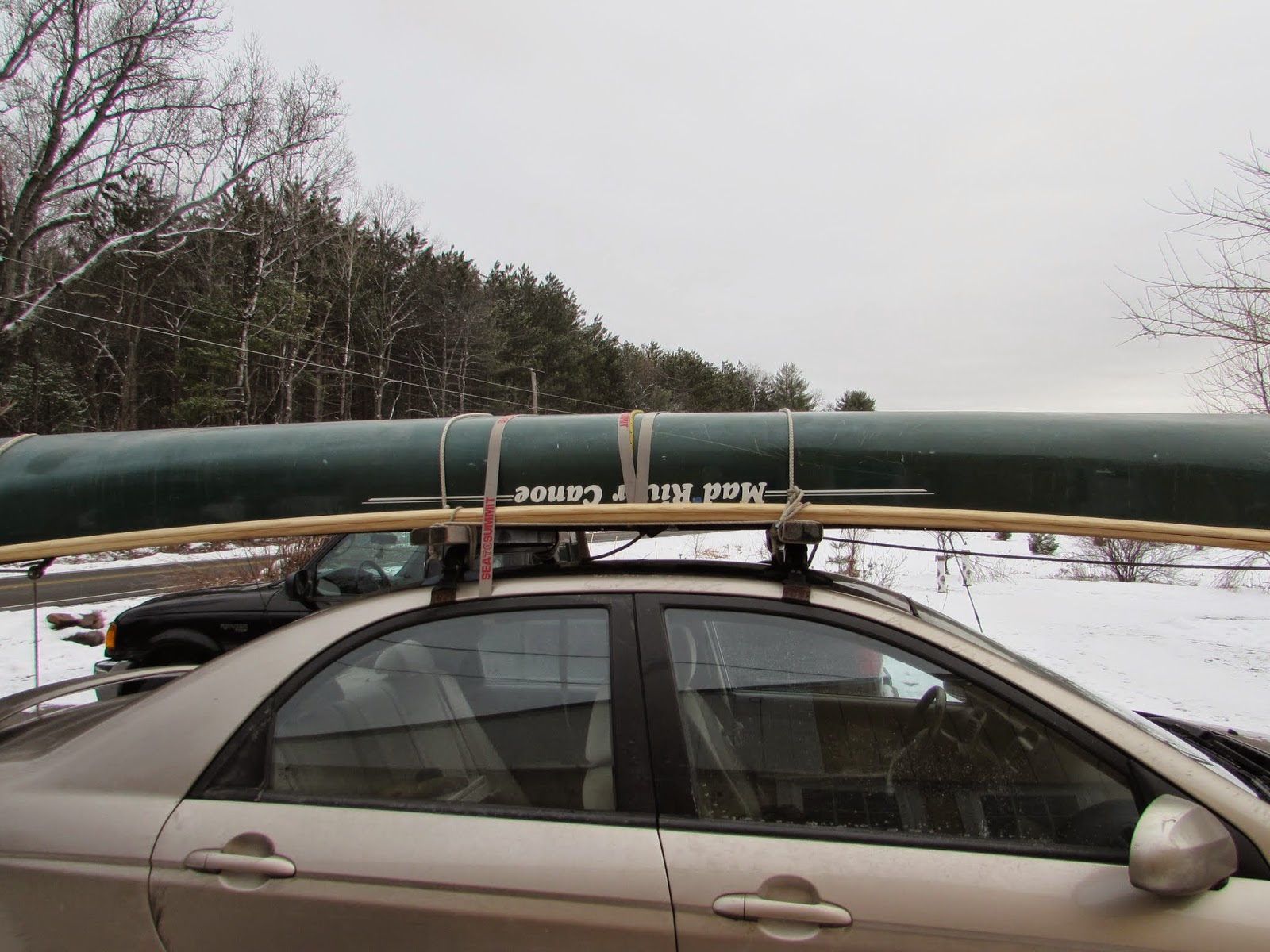 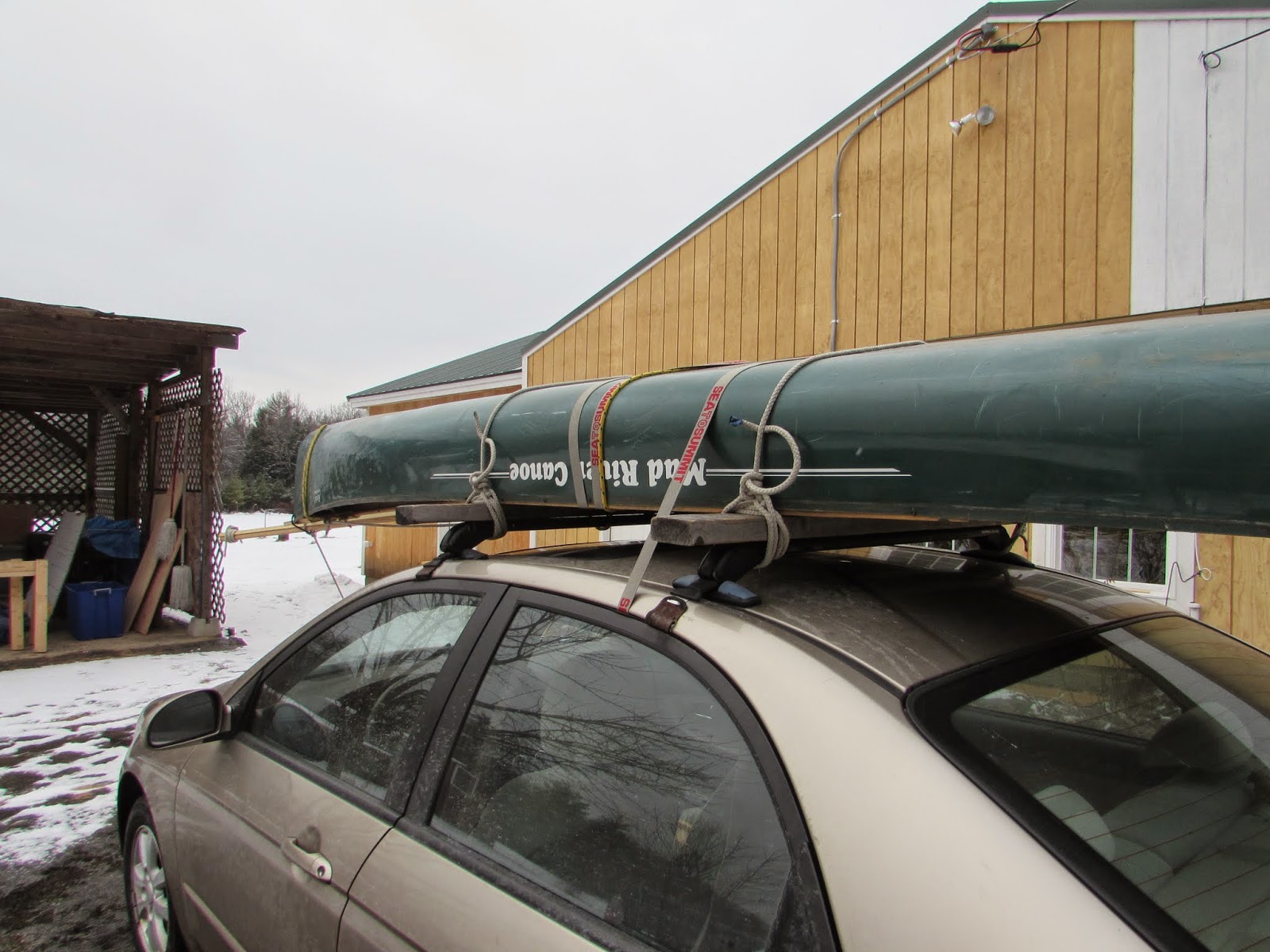 I can honestly say that other cars stayed off my arse while on the road!  Small car, long boat!

The previous owner had cut one gunwale short where it meets the deck at the bow.  I think I can either scarf in a piece of ash or I do have enough gunwales cut already that I can replace if need be.

The gunwales also need to be sanded out where the screw holes were made.  As well the deck is not mounted tightly so the that has to be redone.  It is hard to tell if the gunwales are treated or not.  I prefer varnish as I don't like taking the time to oil them.  I have two canoes where I do that.  Not fun.

This also came with three contour seats which I'm going to use two for the rebuild.  I'm not sure if I'll use the hangers as I think they are kind of shallow but will test them out but have enough of the old style sitting around to make a fix.

My plan is to take out the cane as I've mentioned before I hate cane seats!  I'll replace them with web which is a good winter job to do.  I'm adding some other pics as this is a Demo boat.  Looks like a lot of wood work this time, no hull or fiberglass work to do although I do need to put on skid plates. 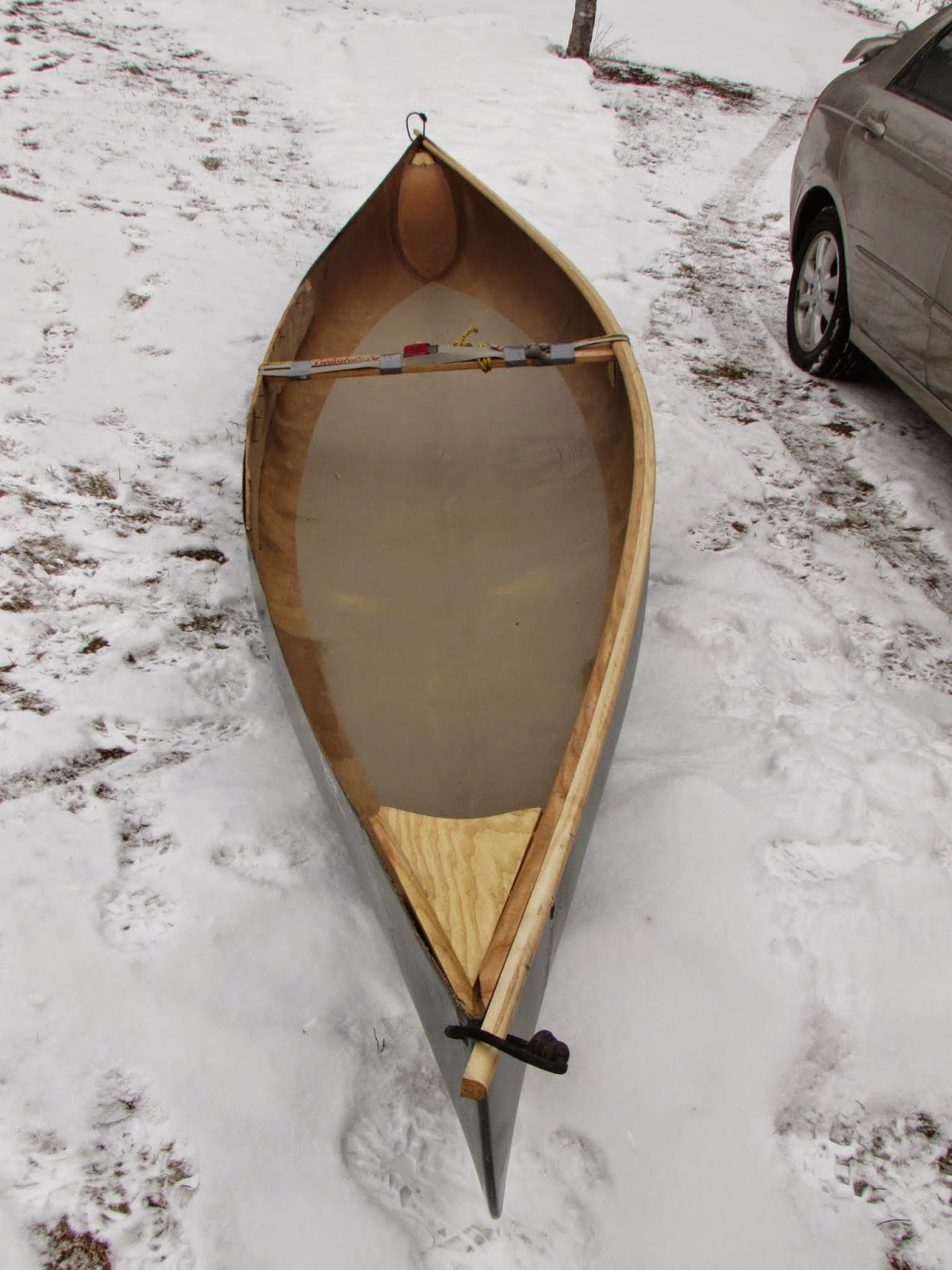 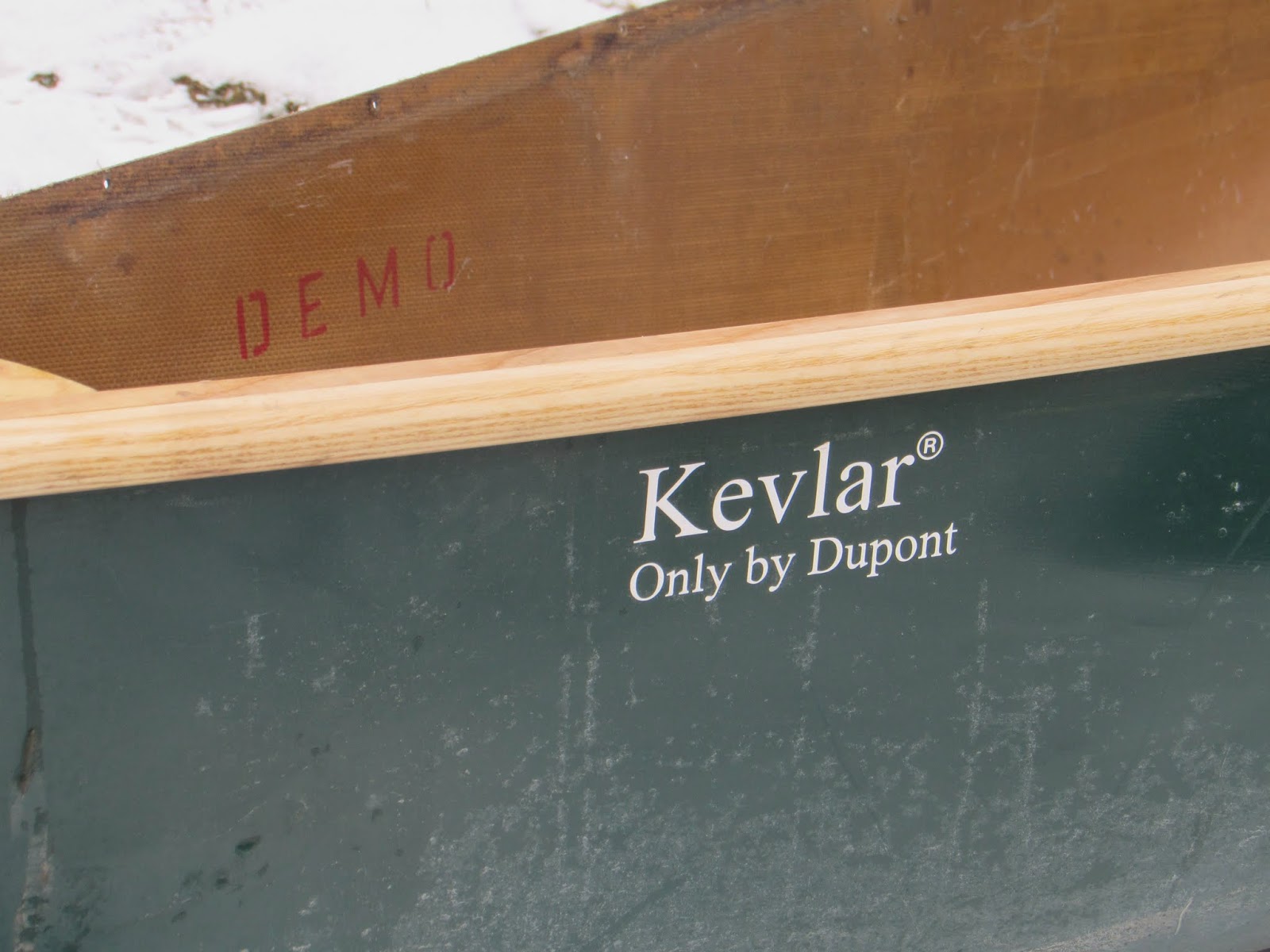 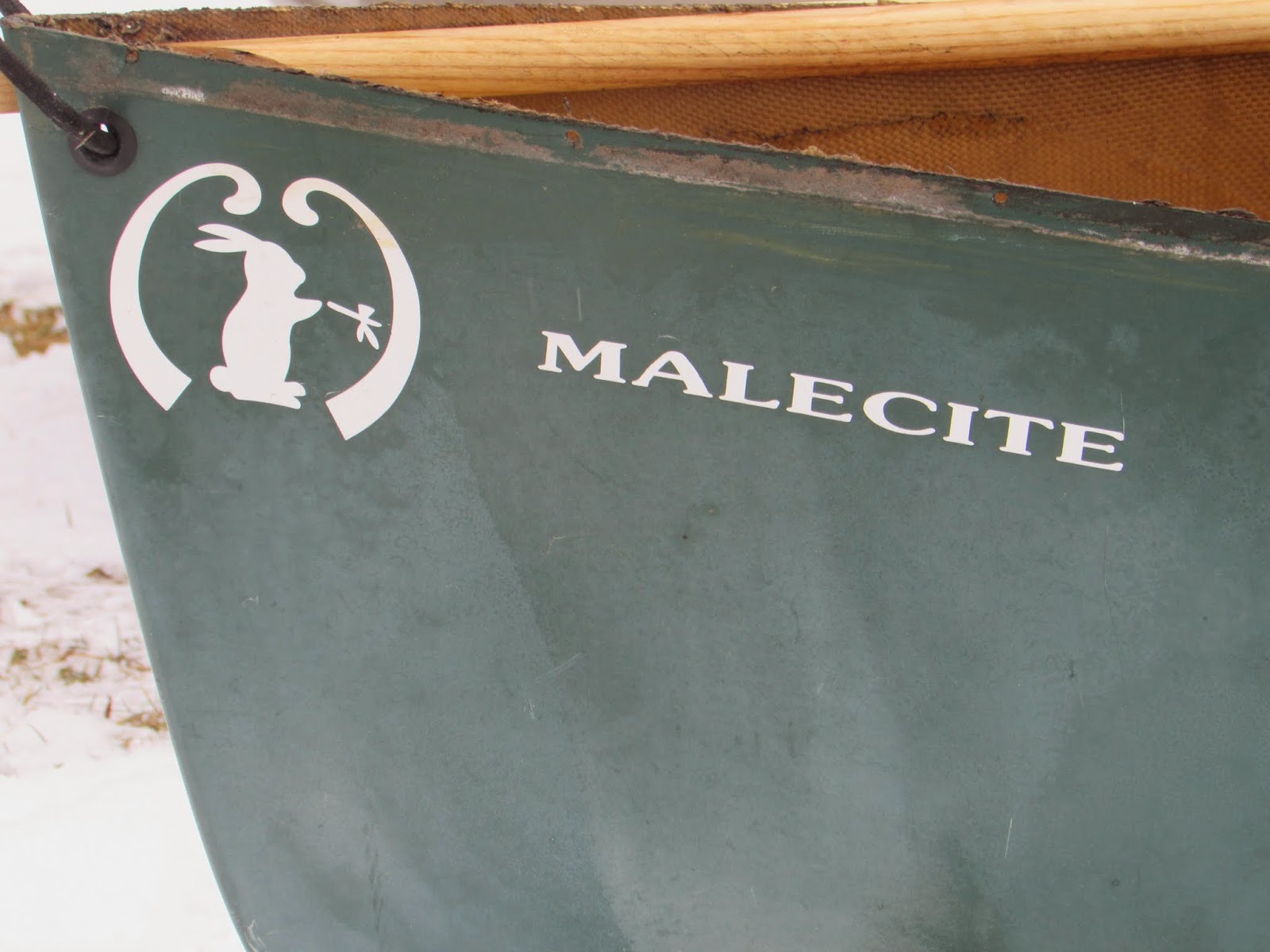 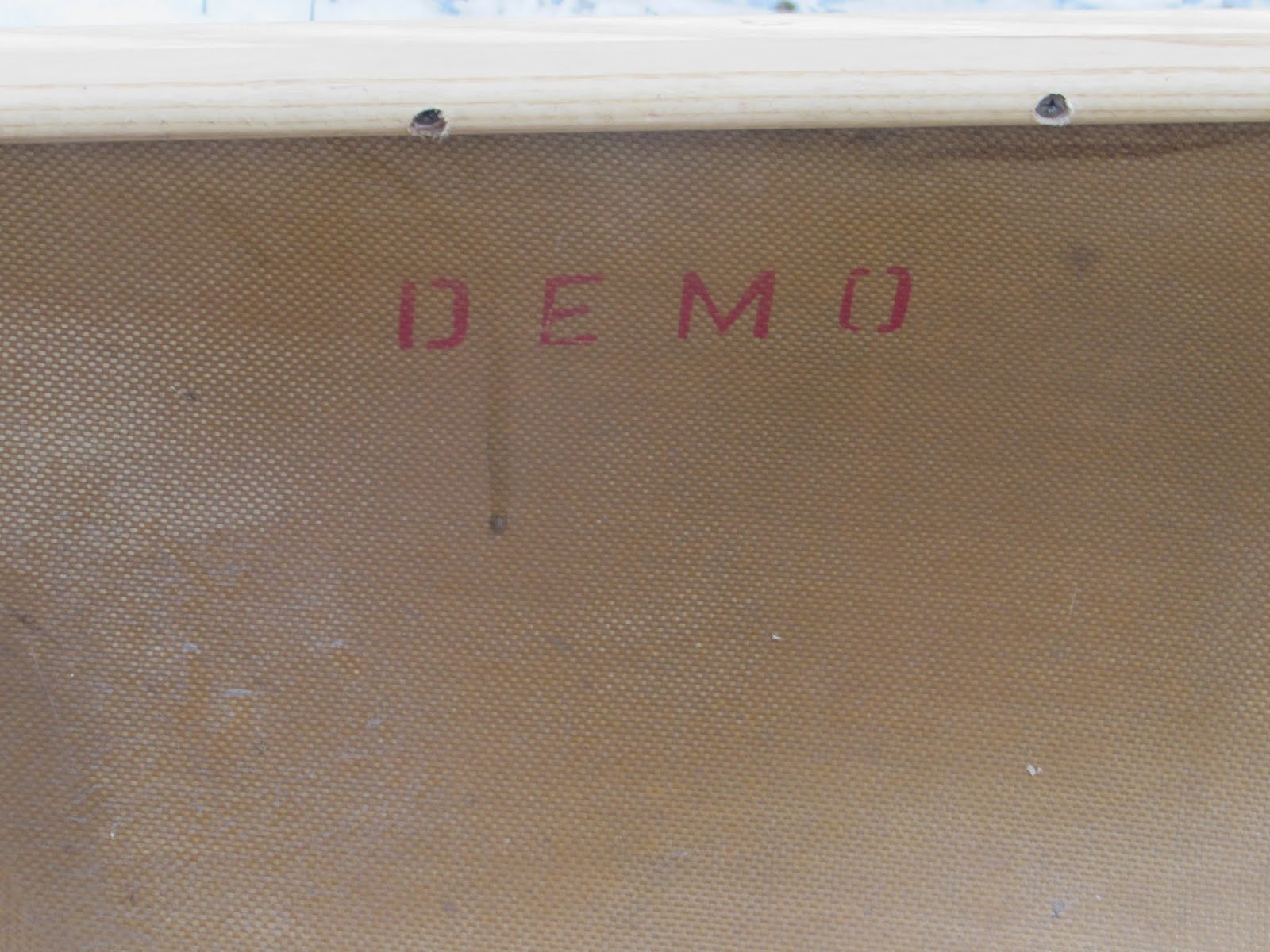 So it's time to start putting this hull together.

I usually document all of my fixes but this one was a heart breaker.  I finally finished milling out new decks, refinished all the brightwork, tore the cane out of the seats, treated the wood and installed webbing,  installed a new carry thwart and called it done!  I picked it up to carry out of the workshop and SOB the gunwales on one side ripped right out of the hull!  I couldn't believe my eyes!  I got it outside and put it down and looked at the other side and surnough it had ripped out as well.  I felt like crying cause I knew exactly what this meant...starting over!  I didn't throw anything, didn't kick anything but sure swore up a storm.

I got it back into the shop and started unscrewing everything and taking them off.  Now here was the real bear.  The screws on the gunwales were from the original owner and I had used them.  Of course several of them stripped as I tried to back them out and I had to cut them off with my hack saw blade.
Once I got those off I could see that when I put them on they had ridden too high due to the rabbit in the outwale and barely attached to the hull.  I had had a feeling those rabbits would come back to haunt me.

So, now it was back to scratch!  Thankfully I had another set of gunwales set for another boat and was able to use those.  But now I had to do some major fixing.  A coat of resin on the hull to fill all the holes, drill new holes in the gunwales and then treat, I use varnish, with three coats which takes a week or so, buy new screws and then reassemble the whole damned thing over again.