I like to sail.  Not in sailboats that cost more then I make will make in my lifetime but canoes.  Canoe sailing has been around for who knows how long.  My introduction was on a trip on the Albany River in Ontario back in 1974 while crossing a twenty mile long lake.  A tarp, some saplings and the bowman, me, holding it up as a downwind rig and we cruised at an amazing pace. I was hooked.

Fast forward many years and now most of my canoes are setup for sailing.  My only downfall is that they are all rudderless meaning I have to use my paddle to rudder while stepping on my boom line to hold it in place.  It works but has always left me very on edge, it is quite easy to tip over a sailing canoe and although I haven't done that yet it is just a matter of time and I do not look forward to that carnage!  So, I decided I needed a way to mount a rudder on my canoes without doing a dedicated mechanical system.  This is using a gudgeon which is a permanent piece of equipment which I do not want on my hulls.

Since I have a variety of canoes hence different shapes and designs I wanted a drop in rudder deck that would work with each canoe.  Now for the record I have been working on this for years now and in disgust have thrown almost every design into the garbage can.  To many pieces, too stupid, too much of this, that and the other thing.  In essence I was working it to hard and decided to take a hiatus from it all.  Many times walking away is the very best step.

So last week I was watching a movie, Blade the Trinity, and one of the characters opened it's mouth into many pieces.  Holy shit!  It hit me like a bullet in the forehead. I needed to make an expanding and adjustable jaw that would fit each canoe but would be minimal in moving parts yet secure for the force of the water on the rudder and meet my criteria of being able to store away in a small bag when not in use. I needed to start working on this!

Using a cardboard box I cut out a rough shape of what I thought would work.  I'm posting pictures and trying to explain as I go along.


Using the two pictures pictured above the idea is to have a split deck with holes drilled for supporting and binding added pieces inter-locking to the design as far as keeping it tight to the hull.  The dots are for two pieces that will hold the deck from spreading and preventing back and forth movement.  These are the two parts that have me stumped for a long while now and banging my head against the nearest board with all the other designs I've stupidly come up with!

With a new idea I need just a few working parts and after cutting the deck down the middle here's what I came up with for keeping them from spreading. 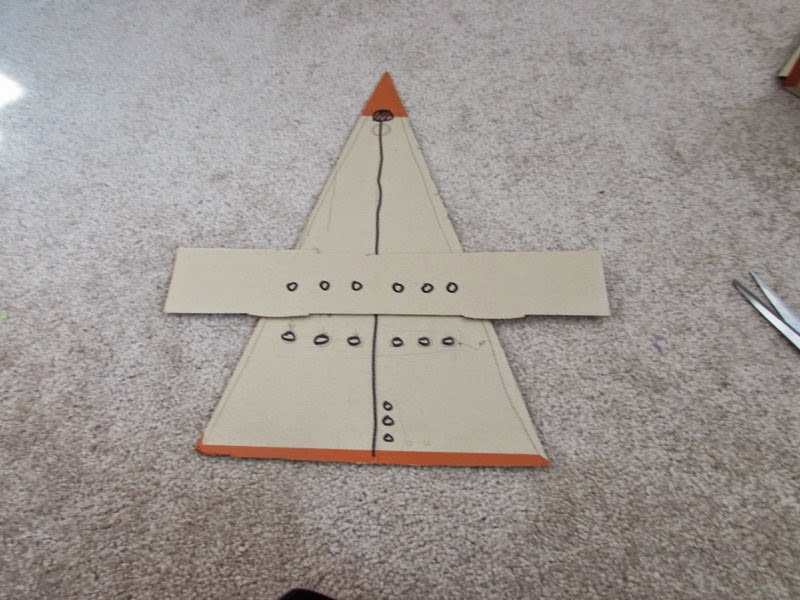 An independent piece of material that lays on top with matching holes to hold the decks in place according to the canoe.  I realize this will be a hit or miss thing and will have to play with placement as I go along.  One thing I realized as I reviewed this is these holes will have to drill on a curve and not straight across unless I'm mistaken.  Baby steps is what I keep telling myself.  Supposedly this will take care of side to side movement but I have an added step for this.  I want to add what I will call side rails to the deck.  Simply just a vertical of X depth running down the entire length of the deck lined with foam of some kind to aid in stability. 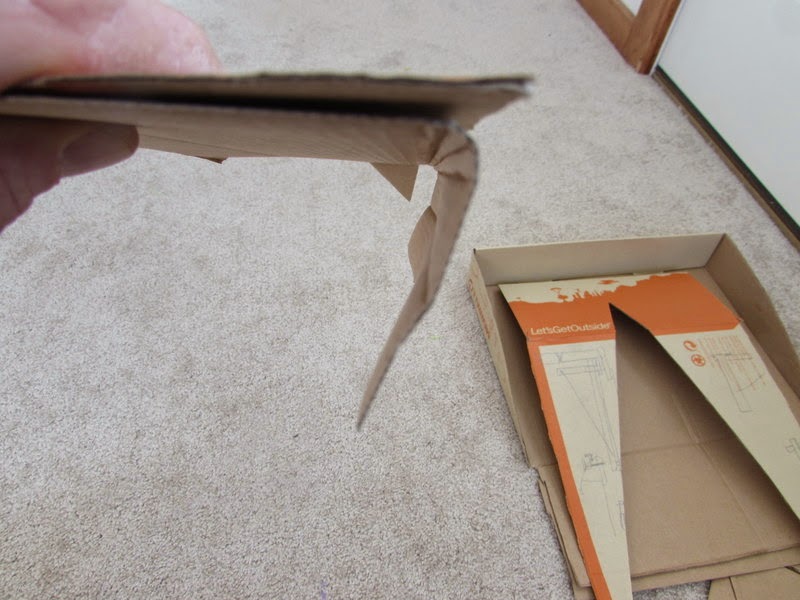 These pieces will be solitary and have no movement, just acting as an anchor.  Next is a way to prevent bow to stern movement with the power of the water on the rudder.  In my opinion this is the most critical part of the whole design.  Once the rudder is down under sail the water is going to pull on that sucker like Poseidon trying to pull the boat down the floor.  My idea, for now, is to make a hook that will be adjustable to the carry handle.  Since I have rebuilt most of my hulls I have never set a standard positioning of my carry handles.  I didn't need until NOW!  Here's what I am thinking. 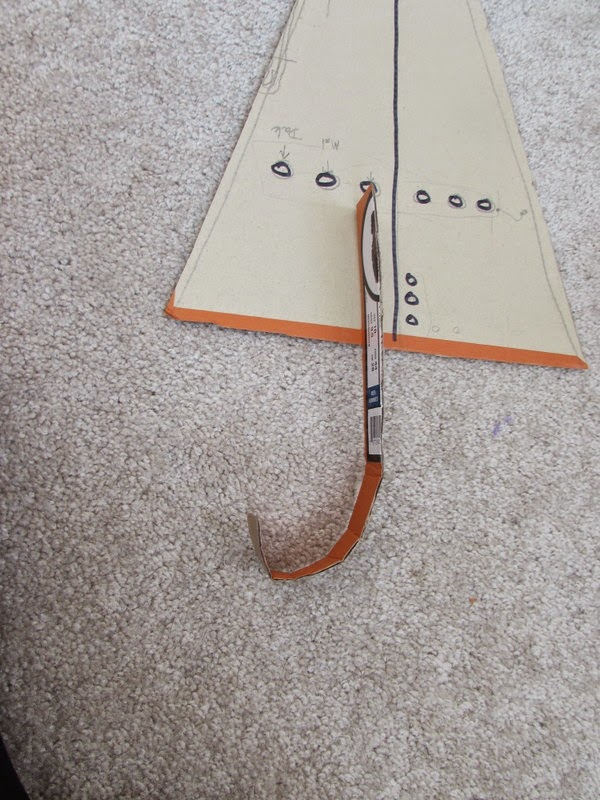 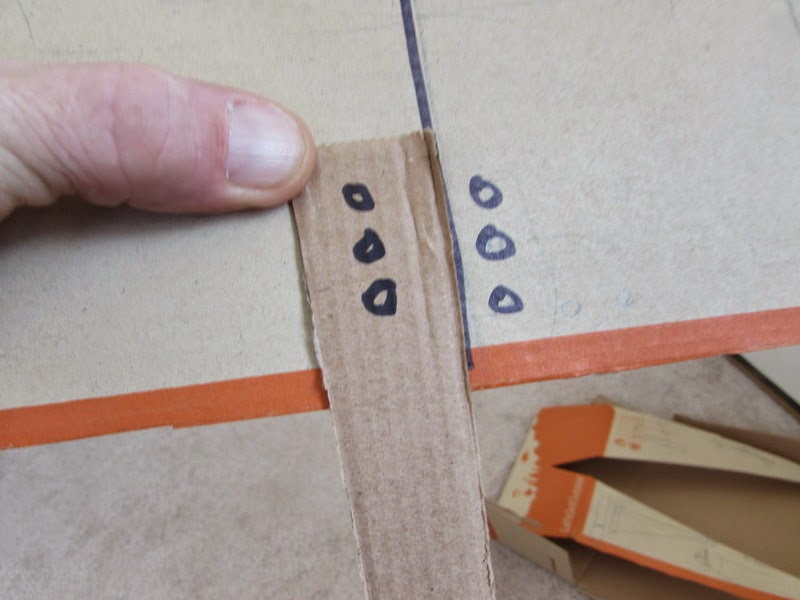 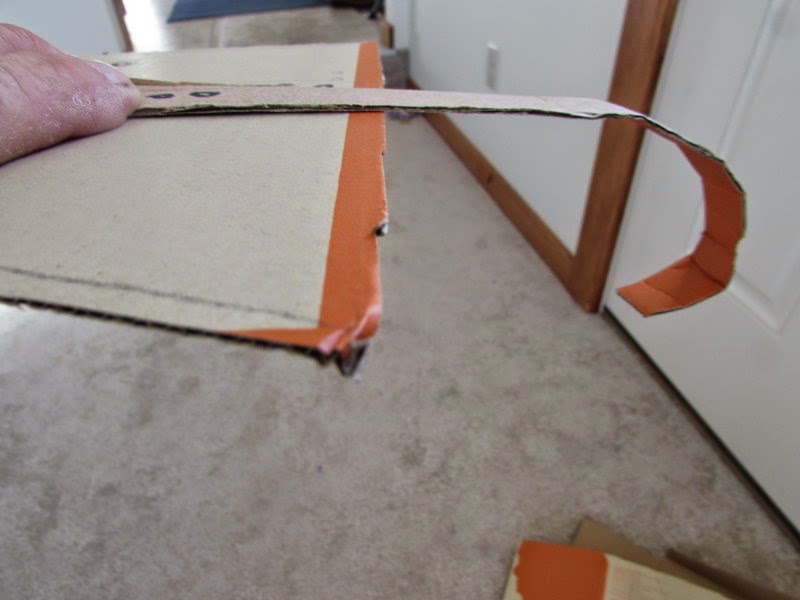 From the pictures I want to make a hooked arm that will attach to the deck and warp around the carry handle.  Holes drilled in the deck will make for adjusting to each hull.  Again, this will be a trail and error thing as I mentioned none of my canoes are not setup the same.

So, how will this work you ask?  Kinda like this.

The two V pieces will act as the pivot point using the tip of the V as the joining point.  That is where the mount for the Featherlight rudder will mount.  Since the deck will be two separate pieces this will have to hold them together and that part will come later in this report.  The Black hole represents where the hole for the rudder will go and the two pieces will overlap each other so the hole will match thus holding that end together.

Since I already have the rudder set up for either foot controls or a tiller it's simply mounting a vertical section to hold that and then secure it to the deck.  That is in the works but not totally figured out.

The prototype is in it's infancy but I have high hopes for this design, finally!

I have decided to deviate from the original plan as I am going to use this on my MR Malecites and probably no other boat.  That's not to say I have ditched the previous plan but need to keep to something a little simpler.

A friend saved me some backing from some cheap Ikea bookcases which I think will fit the bill with thickness.  With three large pieces of this I have room for mistakes which I think there will be a few of. 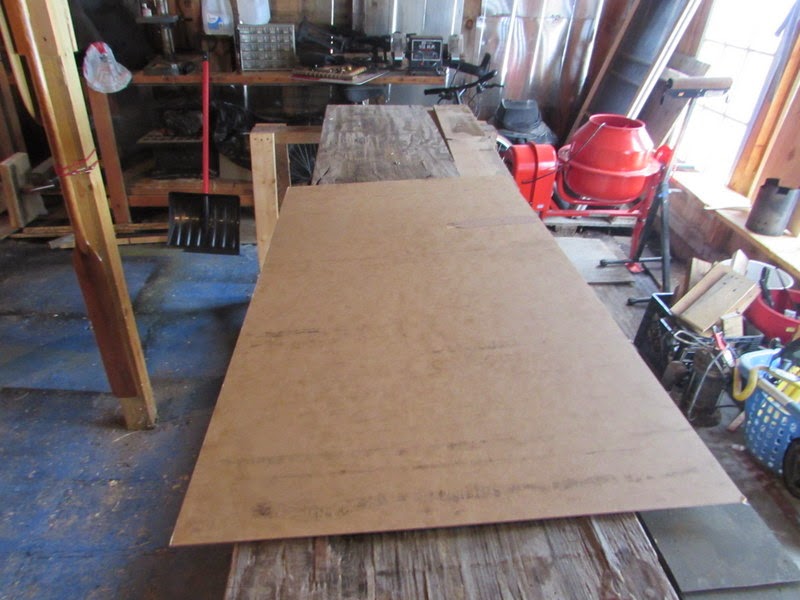 My thought is to cut to size and then cover it with either S-glass or Dynel and resin for stiffness.  I spent a fair amount of time walking back and forth to measure the decks I have on one of the Malecites which came out to be seventeen by thirteen, I like long decks on this boat.  I then looked at the other Malecite which came with inlaid decks that are meant for this hull and are much shorter so I will have to mill out some new ones for the old hull.

I decided to go with thirteen by fifteen and traced it out.  Since this board is thick enough to make a cob job with a knife I got out my saber saw to make the cuts. 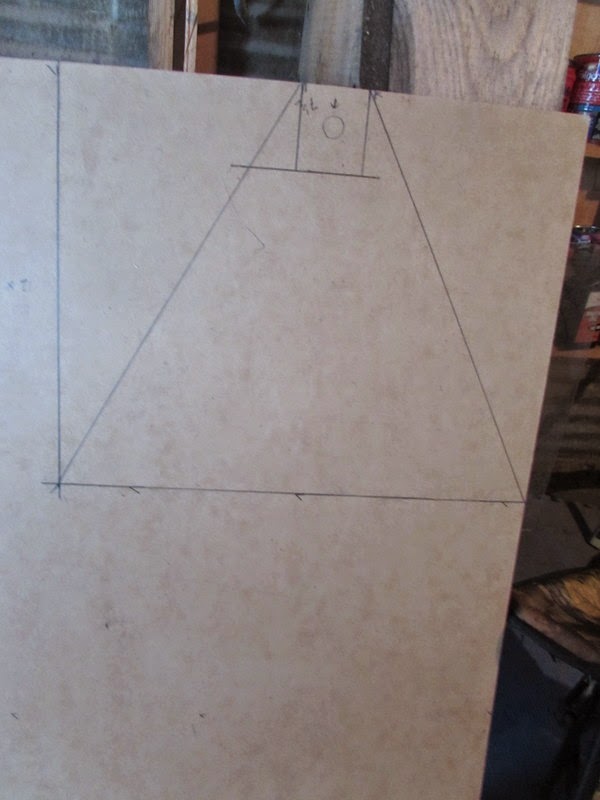 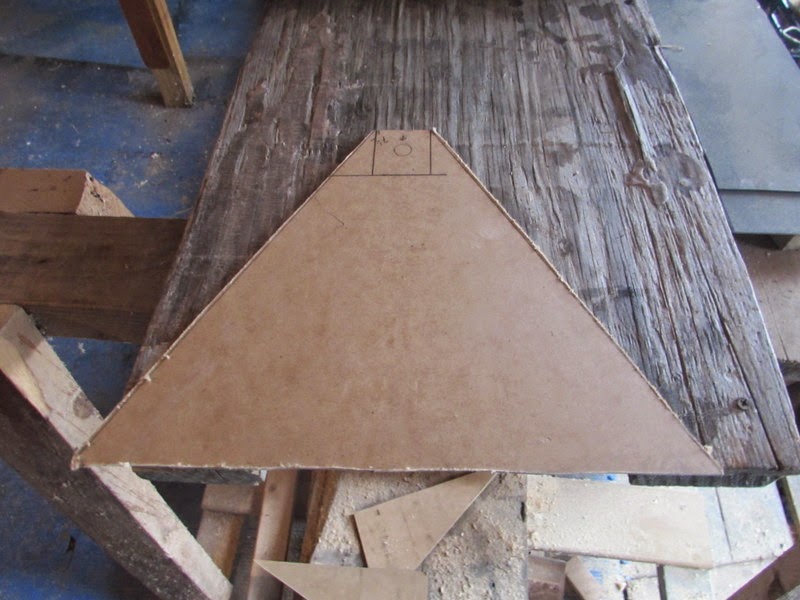 I then marked out for the vertical piece I need that runs about four inches down the stem of the hull.  This will hold the rudder and Featherlight mount.  After reading a thread on using foam and cloth and resin I thought I might give that a try to keep this light weight.  I will have to experiment with that though ahead of time.

I used a piece of packing foam as a template but kept coming up short on how to make that a rigid part of this whole mess.  On my second can of liquid courage and a lot of head scratching I happened to look over at a pile of crap I have, need to clean that up, and saw a piece of aluminum I cut from a stop sign for the new rudder.  BA-BING!  There was my answer right in front of me and the best part was I didn't even have to cut it! 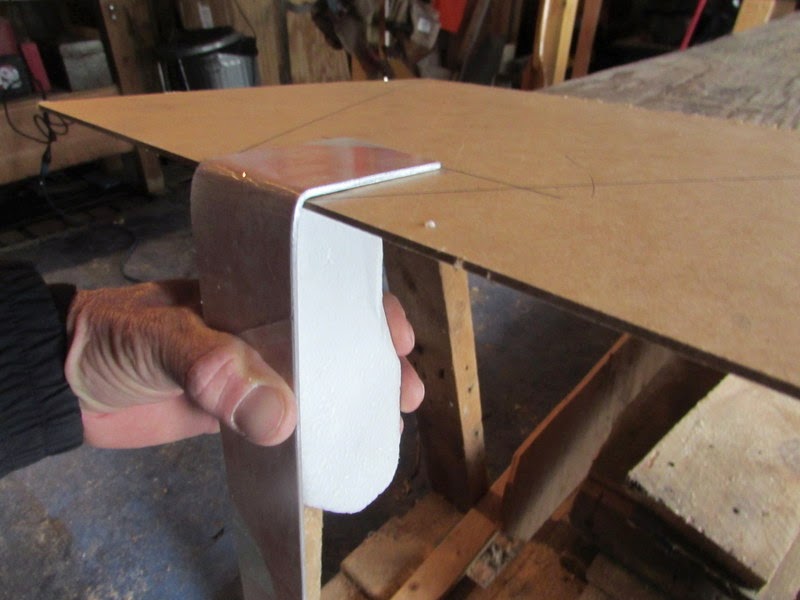 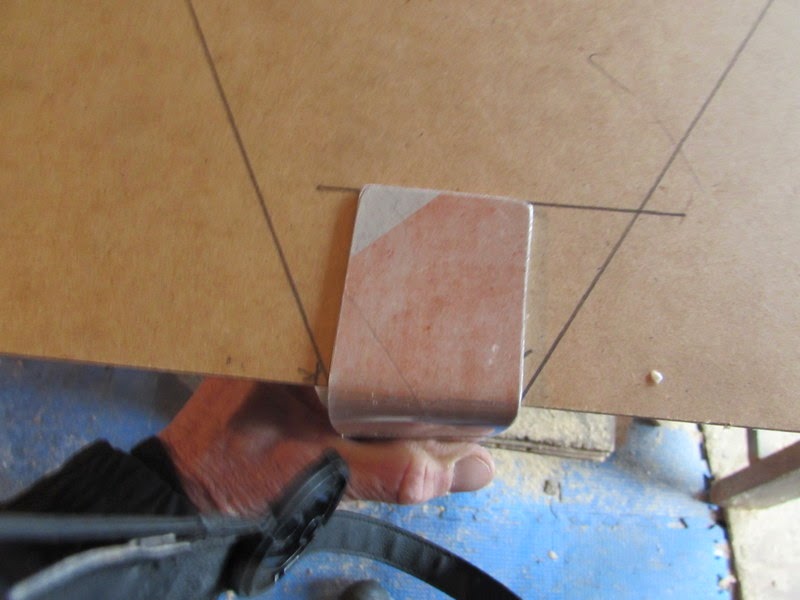 A simple bend in the vice and I had a working piece to play with.  I have some thoughts on how to marry these three pieces together.  Due to the cold weather I am on hold as the next step is to play with foam and resin.  I do have several types of foam to work with.